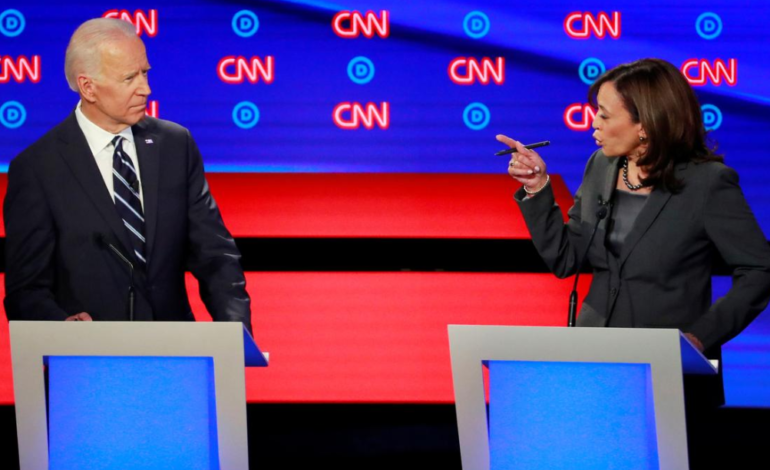 Biden and Harris debate the issues. Photo via Lucas Jackson/Reuters

DETROIT — Day two of the Democratic presidential debate at the Fox Theatre touched on many topics of great importance to the Arab American community, including the immigration crisis and selecting a candidate capable of defeating President Trump in 2020.

Biden, considered the front-runner, did his best to fend off challenges from younger opponents, including Harris, during the debate.

“Go easy on me kid,” Biden said to the California senator prior to the debate.

Castro accused Biden of not doing enough on immigration and failing to learn from the mistakes of the Obama administration, while Booker criticized his perceived shortcomings on criminal justice, particularly in regards to reforming a system that disproportionately incarcerates people of color.

While the focus was mostly on the issues, the specter of Trump — and his penchant for rhetoric condemned as racist according to a recent U.S. House resolution — loomed large, as evidenced by Biden’s opening remarks.

“Mr. President, this is America,” Biden said. ” And we are stronger and great because of this diversity, Mr. President, not in spite of it.

“So, Mr. President, let’s get something straight:  We love it.  We are not leaving it. We are here to stay.  And we’re certainly not going to leave it to you.”

Biden’s comments referenced recent Trump tweets directed at a group of four progressive U.S. congresswomen, including Muslim Americans Rashida Tlaib (D-Detroit) and Ilhan Omar (D-MN), during which he said they “hate our country” and can “leave” if they are “not happy here.”

Harris said that America is a nation that “fights for the best of who we are” in her opening remarks while taking aim at Trump.

“And I am prepared to march with you, to fight with you for the best of who we are and to successfully prosecute the case of four more years of Donald Trump, and against him,” she said.

Biden’s comments on the Obama administration’s record on immigration were interrupted by a group of protesters from the immigrant-led Cosecha movement, who began chanting “three million deportations” and unveiled a banner reading “stop all deportations on day one.”

The figure referenced Obama’s time in office, during which some referred to him as the “Deporter in Chief” for the millions of deportations he oversaw.

Castro, who has challenged Biden on the Obama administration’s policies, said he would like to see the borders opened to all immigrants. De Blasio also questioned Biden on whether he used his position as vice president to stop deportations, to which Biden replied that he made his recommendations in private to the former president.

“I still don’t have an answer,” the New York governor retorted.

“You can’t invoke (his track record with Obama) when it’s convenient and dodge it when it’s not,” Booker said, one of many sharp criticisms leveled at Biden that night.

Inslee spoke of lawsuit victories against the Trump administration as well as his state’s policy of welcoming Syrian refugees, while Yang spoke about the need to speak out against immigrant scapegoating, which he says is a function of an economy that has lost many jobs due to automation.

Attorney and Wayne County Airport Authority Board Chairman Nabih Ayad was among those invited to the debate, although he was not able to attend.

Ayad said he doesn’t believe the current field of candidates has what it takes to challenge Trump at this point.

“To be a true contender to beat Donald Trump, you really must take an aggressive stand and be extremely aggressive coming out in any form,” Ayad said.

“From what I see from the debate yesterday, it doesn’t seem like it’s there just yet by any of the candidates, given what they’re up against.

“It was really just, it was too soft, in my view…They should have been a little bit more aggressive and shown some fury because that’s going to be needed to beat Donald Trump.”

Mike Sareini, the current Dearborn City Council pro tem, and a Democrat, said the debate put on a “great show” for the city of Detroit and its surrounding communities and that he thought it had more substance than the previous night’s debate, noting discussions on issues such as immigration and climate change.

“Immigration caught my attention,” he said. “I’m glad they’re talking about it, how it’s done and which route they’re going to go. In the long run it has to be addressed; we’re ready to get this immigration crisis handled.”

Sareini also said he believes the Democratic candidates have potential as the race for the White House and the 2020 election begins to heat up.

“I like the group they have out there,” he said. “It’s a good candidate pool and I think they do understand and are willing to make sure their statements are heard. That’s what’s going to have to happen in order to win over the presidency.”