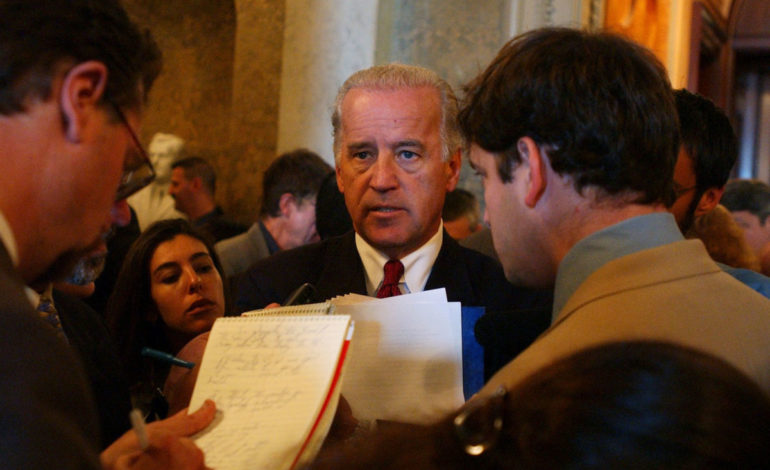 Even though former Vice President Joe Biden’s favorability has declined following the first Democratic debate, he remains largely considered the frontrunner for the Democratic presidential nomination by many mainstream media outlets and pundits.

Early in the first debate, Sen. Bernie Sanders mentioned how Biden had supported the Iraq War and that he had voted against it. Biden responded that he now wanted to see the U.S. out of Afghanistan. Yet Biden’s role was more sinister than that.

In 2002, Biden was the chair of the Senate Foreign Relations Committee. Following 9/11, he conducted the “Hearings to Examine Threats, Responses and Regional Considerations Surrounding Iraq” on July 31 and August 1, 2002.

At the time, Biden classified the meeting as secret and did not allow public review or attendance. The media largely did not cover this meeting. With the exception of the late Sen. Paul Wellstone (a committee member), the people invited to attend and give a submission were not on record as being against the war. Notably absent from the hearing was Scott Ritter, the former United Nations weapons inspector in Iraq.

In September 2002, Biden spoke before the Senate and made a case for war against Iraq. He followed that with a nearly one-hour Senate discourse supporting the war on October 9, 2002. It was Biden’s inference in this Senate presentation that suggested Iraq’s weapons of mass destruction (WMD) threat in mainstream discourse. When the transcript of the September 2002 Senate meeting first became available, I downloaded it. As someone who had worked on weapons systems and had as high as a top-secret clearance, I had experience with infrared missiles, inertial reference navigation systems, global positioning systems and radar for use in both military vehicles and ground-firing howitzers, as well as conventional and nuclear missiles and bombs. I also had unrestricted access to the classified library of the U.S. Navy and knew of other proposals in the military by U.S. defense industries. I figured that if there were to be anyone qualified to assess a threat, I was certainly in the running.

So I downloaded the file in October 2002 and set about to read the 275-page document word by word. I easily spent a couple of weeks doing it. Review of the entire transcript revealed there was no real evidence whatsoever that Iraq was a threat to the U.S. or was in possession of WMDs. Shouldn’t we expect a reference to satellite data, perhaps? Or discussions about facilities that inspectors were being kept from? Or maybe special nuclear sensors that had tripped?

Nothing in the transcript provided any evidence that Iraq was a threat. It was all historical and conjecture about the meaning of Saddam Hussein’s speeches. Nothing technical was even mentioned that required my familiarity with weapon systems. Instead, words and meeting dialogs that Hussein had with his engineers were interpreted as evidence that he had WMD and that his engineers were motivated to the extreme.

For example, Khidir Hamza, once Iraq’s leading nuclear physicist, discussed posturing by Hussein regarding weapons inspectors as validation of WMD. He also referred to Hussein’s past experience with chemical weapons and alleged purchase of radioactive materials. Hamza had retired from the Iraqi Atomic Energy Commission in 1989 and left Iraq in 1994.

Biden conducted a secret meeting in which his star witness hadn’t been in Iraq for eight years. He concluded Iraq was a threat in spite of evidence to the contrary. The mainstream media cooperated by not even reviewing the transcript of this meeting at the time.

Can we trust someone in the White House who so irresponsibly pushed the U.S. down the path for war and irreversibly tarred our image on the world stage as a nation that did not follow the rule of law?