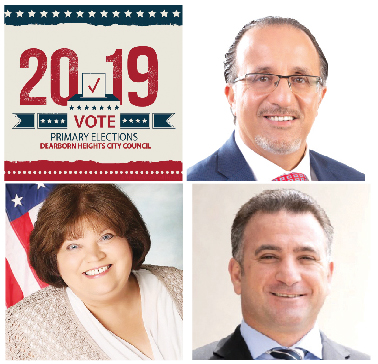 The top six vote getters will face off on Tuesday, November 5.

The seven-member Council sets policies, adopts budgets and enacts legislation, according to the League of Women Voters, which released a guide to the primary on its website. Apigian, who served on the Council from 2011-2015, has a master’s degree in urban planning and is licensed as an architect, community planner and resident builder. Bazzi is a businessman who has worked in the fuel and electric industries. Henney is a realtor of 31 years who has assisted three local cities in neighborhood stabilization programs. Henry is a 38-year Dearborn Heights Chamber of Commerce member, local business owner and Vietnam veteran. Jones is currently finishing her master’s degree in public administration and public policy at the University of Michigan-Dearborn and has been an active volunteer locally. Tripepi has been on the Dearborn Heights Tax Increment Finance Authority for more than 15 years and is a former community liaison for Ford Motor Company.

Polls open for Tuesday’s primary at 7 a.m. and close at 8 p.m. Only registered voters residing in Dearborn Heights can cast their votes in the election.