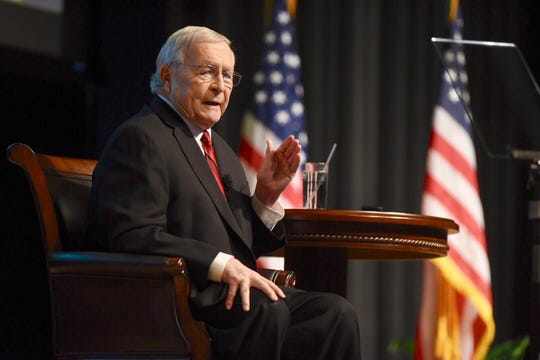 INDEPENDENCE TWP. — Oakland County Executive L. Brooks Patterson passed away Saturday morning at the age of 80 in his home here after a battle with pancreatic cancer.

“It is with deep sadness that I report the passing of our friend and county executive, L. Brooks Patterson,” Chief Deputy County Executive Gerald D. Poisson said. “He was a once-in-a-generation leader whose vision inspired all of us to be part of the best county government in America.”

Poisson will assume duties in place of Patterson until the Oakland County Board of Commissioners appoints a successor, which could happen within 30 days, or a special election is held as provided by law, according to a report from Fox 2 News.

“Our dad was a courageous fighter all his life and he fought right up until the end,” said Mary Warner, his daughter. “Our family is grieving over the unimaginable loss of our father, grandfather, hero, and friend. Many will remember him for his impact on Michigan and generosity toward Oakland County. We’ll remember him for his love and generosity toward his family and friends.”

Patterson was over halfway through his seventh term as Oakland County executive, first taking office on New Year’s Day, 1993. His admittedly sharp-tongued, hyperbolic, unfiltered speaking style and past comments on Detroit made him a controversial figure.

“Anytime I talk about Detroit, it will not be positive. Therefore, I’m called a Detroit basher. The truth hurts, you know? Tough s***,” he said, according to a 2015 article in the New Yorker magazine.

The county thrived under economically his leadership, however.

Under Patterson, the county was able to maintain its AAA bond rating, and has been ranked among the best counties in both the state and the country.

A public viewing will be held for Patterson on Tuesday from 1 p.m. to 7 p.m. at the L. Brooks Patterson Building Conference Center on Pontiac Lake Road in Waterford Township.