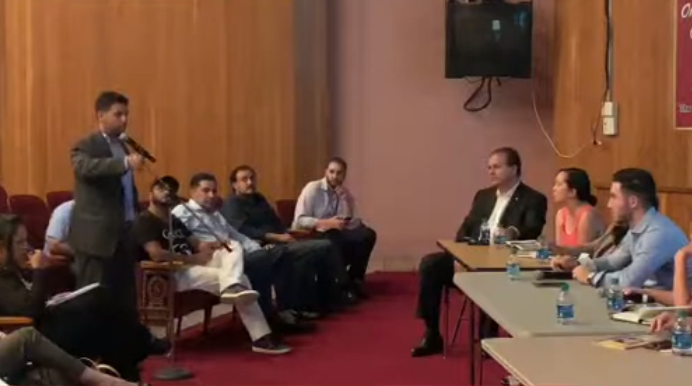 DEARBORN — The southend of the city, and the health of its residents, has been heavily damaged by pollution from local factories for decades, including multiple AK Steel plants that were recorded as having hundreds of pollution related events in the first quarter of 2019 alone.

In addition to air pollution problems, roads in the area, including Miller Road, have been consistently damaged by high volume traffic from heavy trucks.

In order to address these and other concerns, State Rep. Abdullah Hammoud (D-Dearborn) and other local leaders held an Environmental Justice Town Hall this past Thursday at Salina Intermediate School.

“One hundred percent, this has been an ongoing problem for decades, frankly,” Hammoud said. “We have a whole package of bills we’ll be introducing this summer” to help combat the problem, he added.

A press conference is also expected to be held sometime in the coming weeks to shed more light on the problems in the area, Hammoud said.

According to documents obtained by Dearborn School Board member Adel A. Mozip and attorney Chris Bzdok, AK Dearborn Steel Works was responsible for 532 events (excluding steam events) that resulted in pollution discharges in which the six-minute block opacity average exceeded 20 percent.

Large clouds of pollution have been a fact of life in the southend, which was detailed in a 2014 series of special reports from The Arab American News titled, “Fighting to Breathe.”

While the acute problem of discharges from local factories remains a major problem, Chang said that being proactive on the issue can help foster change.

“What I think we really need to do is make sure that the money the company pays (for violating air quality standards) goes back to the communities most impacted,” she said.

Currently, the money goes into a general state fund.

Among the services and changes a community fund could pay for include air quality monitors, vegetative buffers, including plants and trees, to soak up pollution, and health impact assessments.

Chang also emphasized the importance of Gov. Whitmer’s appointment of Strong to the newly created environmental office, which could open up new possibilities for combating pollution.

“We’re looking at working with a response team that includes all the departments of the state,” Strong said.

Also included is an executive order that could be used to acquire an EJ screen, Strong said, which the EPA describes as “an environmental justice screening and mapping tool that utilizes standard and nationally-consistent data to highlight places that may have higher environmental burdens and vulnerable populations.”

A work group was convened last year in Michigan to discuss implementing these and other recommendations.

“We realize this is one of many communities unfortunately impacted heavily by the density of pollution,” Strong said, adding that her goal is to make Michigan a national leader in the area of environmental health rather than its current status of being “infamous” for its problems.

The issues are compounded by damaged roads and infrastructure, problems Baydoun, Hammoud, Dingell and others are studying and meeting on with their colleagues.

But these problems require complex solutions, and residents continue to suffer.

“I didn’t have asthma until two years ago and I’m a Dearborn resident,” Dingell said. “I don’t think I got it out of nowhere, and I’m not a child. When you think about what it’s like to be a child in this neighborhood and the fact that an inhaler costs 700 dollars for some of these parents, we have an issue.”

Hammoud said that legal action could be another proactive way of finally bringing some relief. He also has been working on bills that take into account the placements of multiple factories prior to their approval, because of the heavy toll pollution from multiple sources has on residents.

“We’re working on it, but it’s very difficult to advance, that’s why right now this advancement through lawsuit is one main route we can take to hopefully enact some change,” he said. “I’m hoping the department being friendly now to the community with the new governor can also enact some change.”