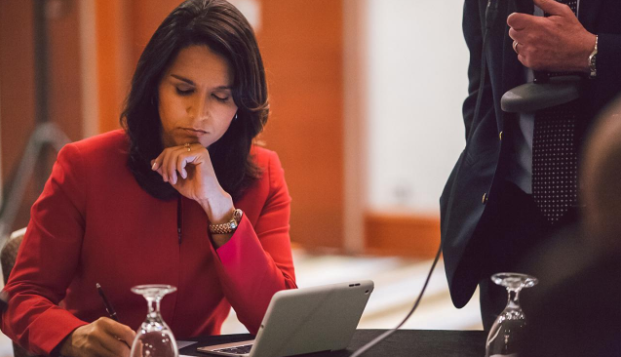 Gabbard's criticism of Kamala Harris at the second presidential debate brought to the surface her own controversial views and history of interacting with some of the world's most renowned authoritarian leaders.

DETROIT – In a teleconference last Friday, U.S. Rep. Tulsi Gabbard (D-HI) spoke to reporters from five ethnic media outlets about her presidential campaign, the importance of diplomatic relationships and other issues.

The conference was the second in an ongoing series of communications facilitated by Ethnic Media Services. It came just days after Gabbard made headway in the second Democratic presidential debate, becoming the most searched candidate of the night.

Gabbard was elected to Congress in 2012. She served two tours with the U.S. Army in the Middle East prior to her Congressional career.

She is the first Samoan American and the first Hindu to serve in the U.S. Congress.

“Hawaii is the only state in the nation that has a majority minority population,” she said. “My upbringing was perhaps a bit different than most other folks in the country, but it is one that I am grateful for.

“What’s at the core of (my campaign) is ‘Aloha.’ It’s a word most people are familiar with as the way we say hello and goodbye, but it means so much more than that. It means, in the truest sense of the word, love. When you greet someone with aloha you’re telling them you come with an open heart.”

She spoke to the necessity of this openness and acceptance in a time of division and hatred threatening the fabric of American society.

She talked of her own roots in South East Asia and Europe, a fact she discovered while being featured in an episode of a genealogical documentary series on PBS.

Gabbard’s criticism of Kamala Harris at the second debate brought to the surface her own controversial views and history of interacting with some of the world’s most renowned authoritarian leaders.

Her diplomatic stance has been a constant talking point for the past two and a half years, any time she has been brought up in political conversations. Her meeting with Syrian President Bashar al-Assad during the heights of the war in that country sparked a controversy, but she has insisted that the U.S. must eliminate its practice of instigating costly regime change wars in order to police the world.

She has also insisted that though she believes Assad to be a “brutal dictator”, she will choose diplomacy over sending U.S. soldiers into foreign military campaigns. She often touts her own military experience as a reason and grounds for maintaining this position.

She touched on the same bilateral action and diplomacy-first approach when answering questions about foreign policy, nuclear armament, immigration and the border.

“We need to get back to the negotiating table,” said Gabbard, speaking on the U.S.’s withdrawal from the INF, the Intermediate-Range Nuclear Forces Treaty, signed more than 30 years ago by President Reagan and his Soviet Union counterpart, Mikhail Gorbachev. “These treaties are critical.”

Gabbard also cited the imminent need to renew START (Strategic Arms Reduction Treaty) and, she said, immediately abandon any “thinking wrongly that a nuclear war can be won.

“That’s what’s at stake here,” she  said. “Nuclear proliferation being kicked off by Trump. The only alternative to diplomacy is war.”

Responding to The Arab American News about the issue of displacement due to civil wars, regime corruption and military conflicts in the Middle East, which not only poses a humanitarian crisis for those affected but also has lasting consequences for border politics, she reiterated that presidents should have the courage to meet with leaders of other countries — even adversaries or potential adversaries — in order to achieve peace and security.

She said politicians and leaders must sit down with people they may have nothing in common with, and even those whose views they find completely abhorrent, and “be willing to have those tough conversations.”

But for the United States, beyond misguided efforts at regime change, she said that, “We have to end this U.S. foreign policy of being the world’s police.

“Time after time, we continue to see how destructive and costly that has been in many different ways,” she said. “First in the cost and toll it takes on the people in countries where we wage these wars.”

She also  said the refugee crisis is exacerbated by these same wars.

She grew more specific in speaking of Trump and Iran.

“The current administration says it doesn’t want war with Iran,” she said. “But every single thing it does points directly toward a path to war, beginning with tearing up the Iran nuclear agreement and closing off diplomatic ties.

“Closing off lines of communication, forcing crippling sanctions, strangling the economy of the people in Iran even though every country that was a signatory in the deal agreed it was in compliance with the nuclear agreement and therefore should not be further sanctioned. This is leading us to a war that would be far more devastating than anything we saw in Iraq.”

She also said Trump administration’s designation of the IRGC as a terrorist group was unprecedented and another move that threatens peace and security globally.

“I’m not going to claim that there is a one-line answer to how to bring peace to the Middle East, but these are very important first steps that would be at the forefront of her foreign policy,” she said.

A recent policy mistake, she said, is the president’s decision last year to withdraw from the UNHCR, the United Nations Human Rights Council, the U.N.’s refugee agency, which the president said had been too critical of Israel.

Calling for diplomacy and cooperation rather than conflict, Gabbard’s closing statement lamented the lost potential for good from countries “uniquely positioned to play a leadership role” in combating climate change.

– Mark Hedin from Ethnic Media Services contributed to this report.