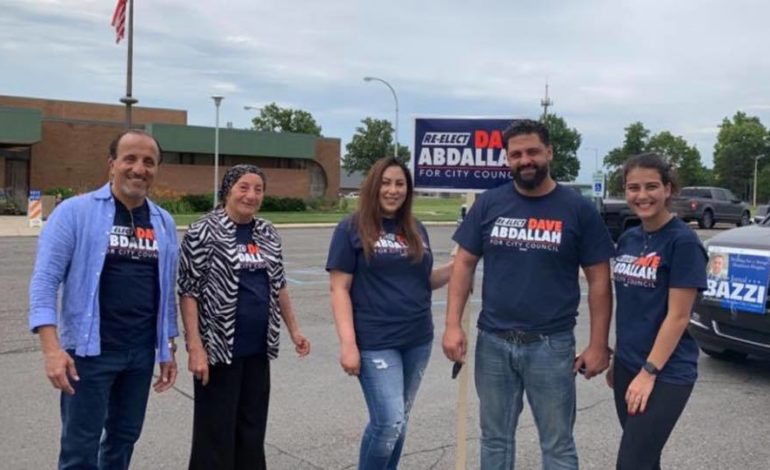 DEARBORN HEIGHTS — Voters in Dearborn Heights headed to the various polling stations to cast their votes for City Council candidates and to decide on a millage proposal in the Crestwood School District.

The top six vote-getters will face off on Tuesday, November 5.

The seven-member Council sets policies, adopts budgets and enacts legislation, according to the League of Women Voters, which released a guide to the primary on its website.

The voters turnout was at 27.5 percent, which is higher than previous primaries without a mayoral, gubernatorial or presidential election; only 10,907 of the 39,594 registered voters cast their ballots.

The three candidates with the highest votes were Hicks-Clayton, who received 20.3 percent of the votes; Muscat, who got 14.29 percent, and Abdallah, who earned 13 percent. Bazzi told The Arab American News that, “there is a recount for the primary elections in process. Sometime next week, because I believe that there was a mistake somewhere along the line.

“The reason I say that is because most of the absentee ballots went to all of the other candidates except for me and something was wrong with that,” he said. “I am not accusing the clerk’s office; I just want to do a recount to receive the votes from the voters who voted for me.”

He added that he’d like to congratulate the candidates who ran and who “took the time out of their busy schedules. “And I would also like to thank those who came out and voted, although not a lot of people voted,” he said. “…A lot of the Arab American population who reside in Dearborn Heights were in Lebanon. That might have impacted the vote.”

Bazzi also said the people who voted are the ones who really care for the city and that he encouraged the Council members to work together for a stronger Dearborn heights.

“We led a respectful campaign,” he said. “I gained friends and I am grateful for that. I also have great respect for Councilman Dave Abdallah, who ran a clean campaign, and I wish him luck.”

“I think it’s really exciting to have had the residents’ confidence,”Abdallah told The Arab American News. “It was honorable when I received the votes the first time, but the second time shows that they are happy with what I’m doing and I do not take that for granted. “There’s still the November elections to win, but I’m very excited about the residents’ confidence,” he added. “And all I can say to the other candidates who ran is that it is honorable to run for the local American government. Congratulations to those who won and I respect all the candidates who ran in general; I just ask everyone to go out and vote. It’s absolutely terrible that we had a low turnout.

“It’s a right that we all have as Americans, to go out to vote all the time,” he said. “And it does not matter if there was no mayoral and presidential elections this year. I would like to see the next turnout closer to 40 percent during the November elections… I’d also like to see more people from the Arab American community come out and vote.”

“Every day I wake up thinking of how to make the community better for the people,” Hicks-Clayton told The Arab American News.

“When I looked at the numbers I was immediately humbled that I was in tears because of the outpouring support,” she added. “It is an honor to serve, and when you do this kind of work I don’t look for a ‘thank you’, but these results tell me that people appreciate what I’m doing. That was grounding and humbling very much.”

She added that to serve the community, she needs to understand people and be impartial to their needs.

“I am so honored to be a City Council member for our residents, and their votes were overwhelming and just amazing,” she said. “The people I serve spoke this Tuesday.”

On the low voter turnout, Hicks-Clayton said that, “It’s because it’s just the primaries and because it is not a presidential or gubernatorial election year. However, I will always be humbled by voters’ support.

“I’m blessed to do the work,” she added. “I get up every day with prayer and devotion, and it is my calling to help people. It is what public service is about.”

The Arab American News also spoke to Crestwood School Board members Nadia Berry and Colleen Krizanic about the millage vote, which failed to pass.

Berry and Krizanic said that the turnout was “very disappointing.”

“I truly think it wasn’t advertised enough, so I think we’re going to go back in December to really try and inform the residents about what the ballot means,” Krizanic said.

“The superintendent for the Crestwood District did not do anything to promote the ballot,” Berry said. “So we’re gonna try to educate the people so that they understand that its not going to impact them.”

“Hopefully we can get out there and educate the people about it,” Krizanic said. “I think the people think that it will be an increase on their property taxes, which it is not.”

“I’m going to make sure that the correct message reaches the people in the district,” Berry said.