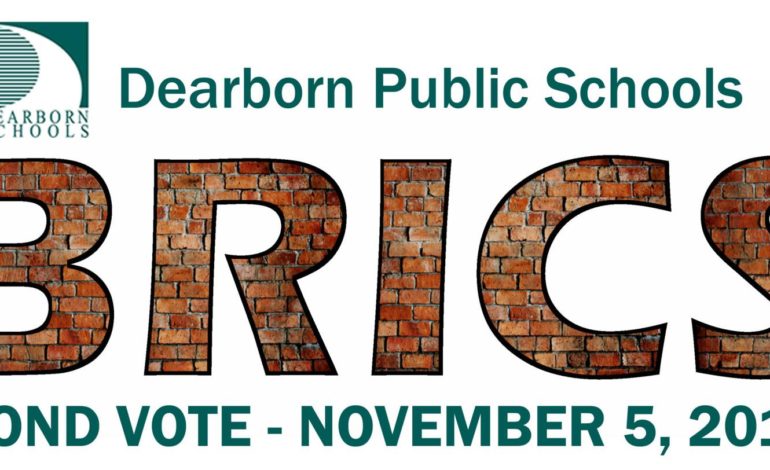 The $240 million is the amount of money that can be added to the current bond debt without increasing the current rate of 4.82 mills.

DEARBORN — The Dearborn Public Schools Board of Education recently approved language to be placed on the November 5 ballot, asking residents to approve a $240 million bond proposal for the district.

According to a statement by the school district, the $240 million is the amount of money that can be added to the current bond debt without increasing the current rate of 4.82 mills.

If the bond is passed, residents would not pay more in taxes as the debt millage rate will stay the same, but the district would be able to make many much needed infrastructure repairs and updates, improve security and safety, and address other areas such as capacity.

The district has dubbed the bond BRICS for the areas it will target — Buildings, Renovations, Infrastructure, Capacity and Safety. The main focus will be infrastructure, including boilers and related equipment, restrooms, roofs, exterior doors and windows, LED lighting, paving and sidewalks and technology infrastructure. Some buses and technology needs will also be purchased.

These focus areas were identified during several months of work by the Citizens Infrastructure Task Force. The group presented its findings to the Board of Education in October 2018. The task force reported that infrastructure, capacity and safety most needed to be addressed, but it also included air conditioning as a separate item for consideration.

Under the bond, capacity would include additions at a few elementary level buildings, renovating and creating classroom space and constructing special education classrooms.

Security and safety changes in the bond proposal include improving how visitors can access schools. In some cases that may mean remodeling or moving the main office closer to the front doors for better control and monitoring of who enters the building during the school day.

The district says that every school building would see some improvement if the bond is approved. On average, each elementary school would get $4 million in work, middle schools $8 million and high schools $15 million.

The official language approved by the board in July says, in part, that:

For more information about the bond, residents are encouraged to visit the District’s bond site at https://iblog.dearbornschools.org/bond/.

Information on the site will be updated as it becomes available. District officials also plan to host a series of meetings at schools and with community groups this fall to inform residents about the bond. A schedule of those meetings will also be available on the site as the dates are finalized.