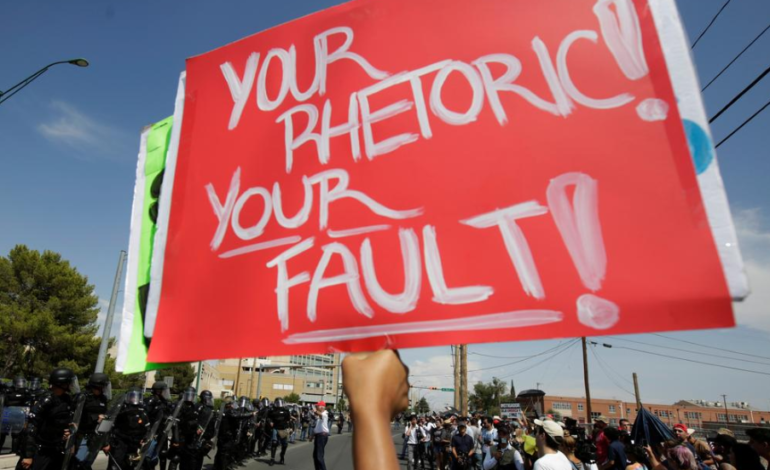 An anti-Trump demonstrator holds up a placard as police block the area outside the University Medical Center in El Paso. Photo via Jose Luis Gonzalez/Reuters.

EL PASO, TX — President Trump’s visit following on the heels of Saturday’s shootings that left 22 people dead in a Walmart here were met with hundreds of demonstrators demanding action on gun laws and denouncing the president’s rhetoric, which many have argued has contributed to the violence in El Paso, as well as Dayton, Ohio, this past week.

Trump also visited Dayton on Wednesday, the site of a shooting in the Oregon district that left nine people dead.

Connor Betts, 24, is the prime suspect in the Dayton shooting, while Patrick Crusius, 21, is suspected of carrying out the El Paso attacks. Cruisus is said to have posted a manifesto on the infamous, hateful message board site 8Chan prior to the shooting during which he showed support for the perpetrator of the Christchurch, New Zealand terror attacks. Some White nationalist figureheads have praised the attacks, according to the Southern Poverty Law Center.

Both Trump visits included meetings with first responders and survivors of the shootings. Trump has also called for unity and for Americans to fight against racist ideologies.

Already, there have been 255 mass shootings in the United States in 2019, more than the number of days that had gone by on the calendar as of August 5.

In El Paso, Trump faced additional criticism over his longstanding anti-immigrant rhetoric, after it was revealed that the suspected gunman’s manifesto referenced an “invasion” of Latinos, using the president’s use of the term describing the influx of migrants at the southern U.S. border. He also reportedly planned to “kill as many Mexicans” as possible, according to reports.

Trump has also frequently described immigrants as “thugs” and “criminals.”

“I think my rhetoric brings people together,” a defiant Trump told reporters Wednesday morning before departing from Washington, D.C., a report from The Hill said.

He also accused Democrats of using the tragedies as a means for their own benefit.

“These are people that are looking for political gain,” he said. “I don’t think they’re getting it. And as much as possible, I’ve tried to stay out of that.”

“He is. He has made that very clear,” O’Rourke said. “He dehumanized those who do not look and pray like the majority of people here. He said I wish we had more immigrants from Nordic countries because those from Haiti bring AIDS, those from Africa are sh—— nations.

“He’s been clear who he wants to keep out with walls and cages as militarization and torture and cruelty,” O’Rourke added. “Again, we in El Paso have borne the brunt of all of that, but we in El Paso are standing up to all of that and I have never been more proud of this community than I have in this moment.”

Trump later mocked his first name as a “phony” representation of his Hispanic heritage.

In a surprising turn of events, Trump, who has been roundly criticized for fanning the flames of division with his rhetoric and refusing to condemn a vocal element of White supremacism among his followers, called for unity in the face of growing hatred and violence.

“In one voice our nation must condemn racism, bigotry and White supremacy,” Trump said at the White House on Monday. “These sinister ideologies must be defeated.”

Trump also suggested a possible link between violent video games, mental illness and Internet bigotry that has been growing rapidly in the social media age.

“These barbaric slaughters are an assault upon our communities, an attack upon our nation and a crime against all of humanity,” Trump said of the massacres, at one point incorrectly referring to Toledo as the site of one attack.

Also this week, a report from CNN revealed that the White House has pushed back against Department of Homeland Security plans to make combating domestic terrorism threats a greater priority than is currently spelled out in the National Counterterrorism Strategy.

The revelations came courtesy of current and former senior administration officials as well as other sources close to the Trump administration, CNN said.

“Homeland Security officials battled the White House for more than a year to get them to focus more on domestic terrorism,” one senior source close to the Trump administration told CNN.

“The White House wanted to focus only on the jihadist threat which, while serious, ignored the reality that racial supremacist violence was rising fast here at home. They had major ideological blinders on.”

The latest mass shootings occurred just one week after FBI Director Christopher Wray warned that most domestic terrorism arrests in 2019 so far have involved White nationalism.

Texas Land Commissioner George P. Bush called for a new push to end White nationalist terrorism in an op-ed in The Atlantic, a radical departure from a member of a GOP that has been mostly silent in the face of the ongoing domestic terrorism threat.

“For me, the real question now is: What comes next?” Bush wrote.

“Terrorism by White supremacists is indeed a real and present danger. We’ve seen it in this country in El Paso, Texas, and in Gilroy, California. We’ve also seen it in faraway places like New Zealand, where another White supremacist walked into a mosque and killed 51 and injured another 49.

“The recent attacks in the United States are shocking, but not surprising. No substantive debate exists about whether this threat is real. The only question is: What are we going to do about it?”