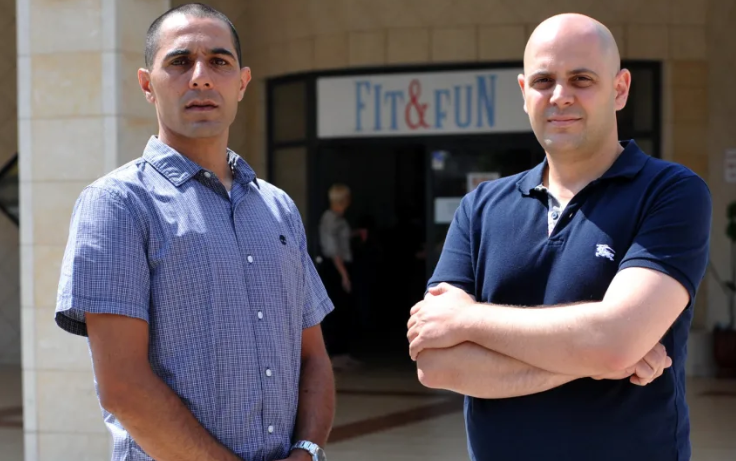 Jihad Abu Ahmed (L) and his lawyer Yamin Masalha (R) outside of the country club, August 2019. Photo via Rami Shllush/Haaretz

NAZARETH —A class action lawsuit has been filed by an Arab resident named Jihad Abu Ahmed of a country club in Upper Nazareth (recently renamed Nof Hagalil) after he was denied membership.

Ahmed, who is married with two children, tried to buy membership for himself and his wife, but was denied. His lawyer, later presenting himself as a Jewish man from the town of Migdal Ha’emek, was granted membership, prompting the suit according to a report from Haaretz.

In a conversation with the club’s marketing department, Ahmed was told that only Nof Hagalil residents can buy memberships.

Another conversation recording obtained by Haaretz included an employee who can be heard saying that “only residents of Nof Hagalil, are entitled…it’s not that there’s anything wrong with a person, it’s only his place of residence. There are no exceptions. We don’t accept outsiders.”

Ahmed’s attorney Yamin Masalha decided to investigate after the rejection, contacting the club and presenting himself as a Jewish man named Haim Cohen from Migdal Ha’emek.

At first he was rejected and given the same explanation, but was also told that the request could be further explored with the club’s manager, the report said.

He was reportedly told that “you can read between the lines…we don’t accept non-residents, whether from nearby villages or from down below (the Arab part of Nazareth), or from the entire area. We can’t allow some in and exclude others. As soon as I let one non-resident in, I have to allow residents of Nazareth, Kafr Kana and other nearby areas in as well.”

Kafr Kana is an Arab majority town in Galilee.

After several attempts, Ahmed’s lawyer, posing as “Haim,” was able to reach the manager, who allowed him to buy a membership for himself and his wife. He told her he was trying to achieve a membership as an exception and was told the following.

“It’s only for residents of Upper Nazareth, except for a few nearby communities. You’re from Migdal Ha’emek, right?”

He affirmed the information, and was granted a membership before being given a tour of the club.

After hearing of the news from his lawyer, Ahmed said he felt “miserable, shocked and discriminated against.”

“I discover that I can’t obtain a membership since I live in Nazareth and not in Upper Nazareth,” he said. “I then found out that some non-residents did get membership and I was told that it was possible. I inquired and was rejected after being told about their rule. I went to a lawyer, ready to accept this, since apparently Upper Nazareth prefers its own residents. But then I learned that ‘Haim Cohen’ from Migdal Ha’emek did get in, despite the no-exceptions rule.”

The club called the claims “’baseless,’ constituting serious slander” and said that it has hundreds of Arab members as well as Arab employees.

The lawsuit states that “given the recorded phone conversations, there can be no doubt that the respondents’ actions with regard to marketing and sales of memberships is unacceptable, intended to discriminate based on race, ethnicity and nationality. This emerges clearly from conversations between ‘Haim’ with the club’s employees, showing that the respondent followed a discriminatory policy that aims to prevent Arabs from adjoining areas from using the country club. Their words speak for themselves.”

It adds that “the respondent discriminates against Arabs who are not residents…there is a disproportionate number of Jews who are allowed in, since Jewish residents of nearby communities as well as Nof Hagalil are allowed to purchase memberships, whereas only Arabs from Nof Hagalil, not from anywhere else, are allowed to do so.”