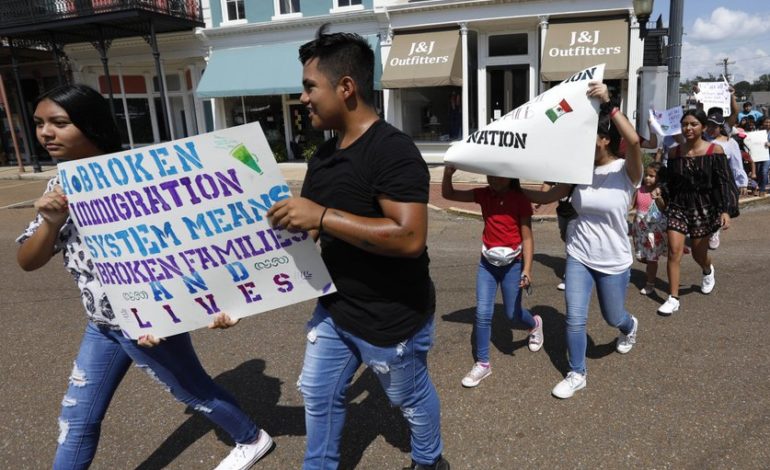 Children of immigrant parents picked up by ICE during a raid in Missouri hold a protest. The Trump administration’s new ruling seeks to deny green cards to those who receive food stamps, Medicaid, Section 8 housing and other benefits. Photo: AP/Rogelio V. Solis

WASHINGTON, D.C.— Several advocates for immigrant families spoke out this week against a new Trump administration regulation that aims to prevent millions of families from accessing health care and other programs by denying them lawful permanent status in the United States.

A person seeking entry into the U.S. or applying for a green card would previously be considered inadmissible under the Immigration and Nationality Act on the grounds that they were liable to become a “public charge” if they had used welfare, SSI or government supported long-term institutionalized care.

An affidavit of support by sponsors was also used as evidence of an applicant’s financial independence, or in other words, proof that they did not have the potential of becoming a public charge.

The new rule expands that list of government programs that could make an applicant inadmissible by including Medicaid, nutrition assistance (SNAP) and public housing (Section 8).

Although the new rule was finalized on Monday, August 12, there is a 60 day waiting period before the rule is enacted. In the meantime, multiple legal challenges are likely, which could lead to further delays.

Advocates and experts emphasize that individuals should not take immediate action if they are currently participating in government programs since the DHS rule does not apply retroactively.

They encourage individuals to use caution when deciding whether to participate in certain programs, making sure that they have the information they need to make informed decisions.

The public charge regulation was proposed last fall by the Department of Homeland Security (DHS). Independent estimates indicated it would threaten about 26 million people nationwide, directly or indirectly.

This public charge regulation received a record number of comments, the vast majority opposed to President Trump’s move. Now that the rule has been finalized, advocates are mobilizing in courts and in Congress to block its implementation.

Many such advocates spoke about the new ruling in a press call conducted by the National Immigration Law Center (NILC).

“This policy denies a permanent, secure future in this country to anyone who isn’t White and wealthy,” said Marielena Hincapié, executive director of the NILC. “We will not stand for it. The National Immigration Law Center is preparing to sue to fight back against this regulation and protect immigrant families.”

Olivia Golden, executive director of the Center for Law and Social Policy, spoke to the audacity of the administration’s dismissal of the overwhelming response to the new rule. The proposal drew more than 266,000 public comments, mostly in opposition.

“This administration has been consistent in its use of harmful and hateful tactics to scare immigrant communities and create fear and anxiety for many immigrant families and their children,” she said. “The rapid publication of this rule despite more than a quarter of a million comments filed during the 60-day comment period indicates that the administration has deliberately chosen to ignore the perspectives, experiences and research provided by a broad cross-section of Americans.

“These commenters included members of Congress, mayors, advocates for women and communities of color, faith leaders, the medical community, educators, immigrants and so many other Americans. These were people from all walks of life in our country who sent a message that this regulation threatens the economic strength of our country and the future of our children. The decision to ignore them is shameful and lawless!”

According to the NILC, the new regulation is one of several recent and planned attacks on immigrant families of color.

Trump’s United States Department of Justice (DOJ) has drafted a companion regulation that would expand deportations based on immigrant families’ use of public programs.

The Department of Housing and Urban Development also proposed regulations denying housing assistance to mixed-status families that include an undocumented person—a move that could reportedly make 55,000 U.S.-born children homeless.

The Commerce Department also attempted to add a citizenship question to the 2020 Census, prompting an ultimately successful legal pushback which lead the administration to seek a completely new strategy to access citizenship records.

Leaders from the Protecting Immigrant Families Michigan campaign will hold a press conference Wednesday, August 14 at 11 a.m., corresponding with the official posting of the rule at ACCESS Community Health and Research Center on 6450 Maple Street in Dearborn. A Facebook Live video stream can be accessed from the Michigan Immigrant Rights Center’s page.