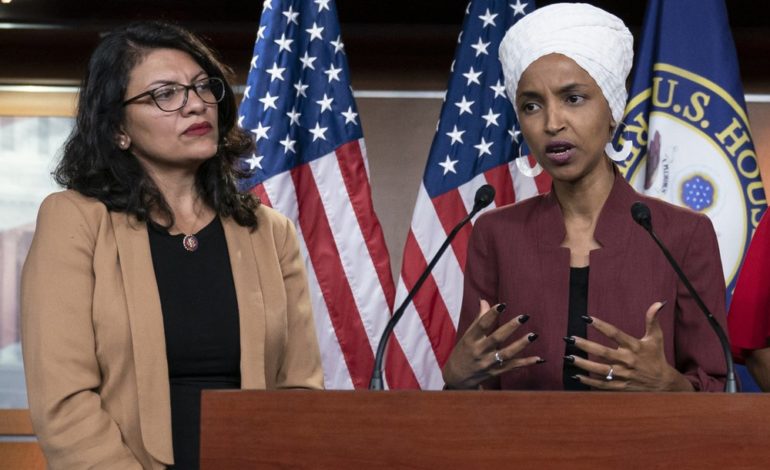 Even ardent supporters of Israel and backers of the anti-BDS bill HR 246 expressed dismay in Israel's decision to prevent the two representatives from carrying out a planned visit to the region.

JERUSALEM – Outspoken U.S. Reps. Rashida Tlaib (D-Detroit) and Ilhan Omar (D-MN) have been barred from entering Israel ahead of a planned visit to the country.

“They hate Israel and all Jewish people, and there is nothing that can be said or done to change their minds,” he said over Twitter.

He also called the two representatives, who are popular in their home states, a disgrace.

It would show great weakness if Israel allowed Rep. Omar and Rep.Tlaib to visit. They hate Israel & all Jewish people, & there is nothing that can be said or done to change their minds. Minnesota and Michigan will have a hard time putting them back in office. They are a disgrace!

“Only a few days ago, we received their itinerary for their visit in Israel, which revealed that they planned a visit whose sole objective is to strengthen the boycott against us and deny Israel’s legitimacy,” he said.

He said the duo had listed Palestine and not Israel as their destination for the trip and had not planned to visit any Israeli officials.

Last week, Israel hosted 70 members of congress, all supporters of the state and of recent anti-BDS legislation in the house, which Tlaib and Omar both opposed.

“However, the itinerary of the two Congresswomen reveals that the sole purpose of their visit is to harm Israel and increase incitement against it,” he added.

He said that if Tlaib, who has family in the West Bank, were to submit a humanitarian request to visit relatives, the minister of interior would consider her request if she agrees to not critique Israel during her visit.

He also said that MIFTAH, the organization that planned to host the duo, supported terrorism against Israel.

MIFTAH is an organization established in 1998 that seeks to promote a sovereign, independent, democratic, tolerant and inclusive Palestinian state, “which grants Palestinians their basic rights, preserves their dignity and enjoys international recognition and respect.”

It said in a statement that Israel’s move to bar the congresswomen from entering was an affront to the American people.

“As a sponsor of this trip, MIFTAH worked hard to organize a well-rounded visit for Congresswomen Tlaib, Omar, and (Rep. Stacey Plaskett (D-Virgin Islands)), in order to facilitate their engagement with Palestinian civil society and to provide them with an opportunity to see the reality of occupation for themselves,” the statement read.

“Like all prolific human rights abusers, Israel wants to impose a blackout on the reality in occupied Palestine and prevent Congresswomen Tlaib, Omar from having direct contact with the Palestinian people, who are subject to Israel’s cruel regime of colonization, oppression, and land grab,” the organization added.

As is customary for political discourse lately, Tlaib herself took to Twitter to make a poignant appeal about the significance of preventing her from visiting her ancestral land.

Pointing to a photo of her grandmother in the West Bank, she said Thursday evening that the treatment of Palestinians at the hands of Israel was “frightening.”

“This woman right here is my sity,” she said. “She deserves to live in peace and with human dignity. I am who I am because of her. The decision by Israel to bar her granddaughter, a U.S. Congresswoman, is a sign of weakness because the truth of what is happening to Palestinians is frightening.”

This woman right here is my sity. She deserves to live in peace & with human dignity. I am who I am because of her. The decision by Israel to bar her granddaughter, a U.S. Congresswoman, is a sign of weakness b/c the truth of what is happening to Palestinians is frightening. pic.twitter.com/GGcFLiH9N3

“It is an affront that Israeli Prime Minister Netanyahu, under pressure from President Trump, would deny entry to representatives of the U.S. government,” Omar said in a statement. “Trump’s Muslim ban is what Israel is implementing, this time against two duly elected Members of Congress.

“Denying entry into Israel not only limits our ability to learn from Israelis, but also to enter the Palestinian territories.  Sadly, this is not a surprise given the public positions of Prime Minister Netanyahu, who has consistently resisted peace efforts, restricted the freedom of movement of Palestinians, limited public knowledge of the brutal realities of the occupation and aligned himself with Islamophobes like Donald Trump.”

Many have called the Israel’s decision alarming and unprecedented.

Dan Shapiro, former U.S. Ambassador to Israel under President Obama, said this kind blockade of U.S. political representatives had no precedent and called the decision short-sided.

Even ardent supporters of Israel and backers of the anti-BDS bill HR 246 expressed dismay.

“Any leader committed to advancing democracy would welcome with open arms two democratically elected United States Congresswomen. And every single member of Congress should be calling this out,” she tweeted.

House Speaker Nancy Pelosi (D-CA), who has been at odds with the Tlaib and Omar in the past, said she was saddened by the news.

“As one who loves Israel, I am deeply saddened by the news that Israel has decided to prevent Members of Congress from entering the country,” she said.

“This decision pulls at the seams of our two countries’ important relationship and endangers Israel by attempting to politicize American support for the country,” he said. “The Israeli government should reject the bigoted, wedge-driving political tactics of President Trump, who recently said that both congresswomen should ‘go back’ to their countries, and grant Reps. Tlaib and Omar entry into the country to do their jobs.”

Michigan Attorney General Dana Nessel chimed in to denounce Israel’s move and spoke to the character of her friend, Tlaib.

“I am extremely disappointed that the Israeli government has adopted the bigoted political tactics of Donald Trump by barring two duly elected members of the U.S. Congress from entering the country,” she stated. “As both a Jew and personal friend of Rep. Tlaib, I am outraged that she continues to face vile attacks simply for who she is and for doing her job.

“Rashida does not judge a person based on religion, race, national origin, sexual orientation or any other classification. She fights on behalf of those she feels are being oppressed, whether it be in her district or around the world.”

She said that although she does not have any decision-making power in this issue, she stood in solidarity with both Tlaib and the thousands of Michiganders who chose her to represent them in Congress.

Even AIPAC (the American Israeli Public Affairs Committee), the powerful Israeli-American lobbying group, said that it believed that members of Congress should be able to “visit and experience our democratic ally Israel firsthand.”