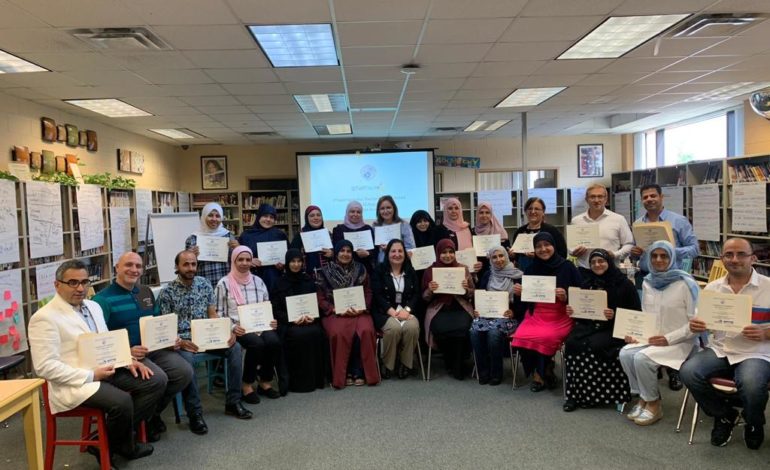 Through STARTALK, Arabic teachers from across the state of Michigan gathered to expand on their techniques and to increase the effective resources of conveying Arabic as a critical language -Photo from Dr. Wafa Hassan, director of the STARTALK Arabic teachers program

DEARBORN — Extending the emphasis on critical languages and global empowerment, teachers from across the state of Michigan gathered to expand on their techniques and to increase the effective resources of conveying Arabic as a critical language.

STARTALK, a federal grant program funded by the National Security Agency and administered by the National Foreign Language Center at the University of Maryland, grants support programs for students and teachers of eleven critical need languages.

The Arabic program, which was held at Riverside Academy West, took place from July 22 to August 2. The program aimed to strengthen teaching strategies and mentorship.

With the grant to hold the program at Riverside, the program focused on advancing infrastructure necessary for bi-literate language learners through the teacher training and mentorship.

Led by Wafa Hassan, director of the STARTALK Arabic teachers program, the roadmap of the summer program relied on the expertise of a statewide network of individuals and organizations committed to advancing the international identity of Michigan for the economy, education and social well-being.

The STARTALK 2019 Arabic program provided solid professional development workshops and skill-advancing practice in teaching Arabic as a world language. Through the small student-to-teacher ratios, teachers were able to implement and communicate the Arabic language and culture.

Teaching strategies included summative and formative assessments; group activities elaborated the importance of communicating in only Arabic and hands-on work.

For its part, the student-to-teacher ratios had a goal to emphasize the importance of learning a critical language and to share how students are becoming more proficiently literate in the language through this program and on a broader path through the teacher training.

“Learning a critical language is good for interacting with the community and broadly important for studying abroad or professional leadership,” Hassan said. ”Engage and interact with culture and start learning a language.”

Hassan, who is also the Arabic department director at Global Educational Excellence (GEE), said learning a language starts with self-expression and identifying surroundings. Moreover, districts across Michigan are centering the Arabic curriculum on the students.

She emphasized the importance of building a step-by-step curriculum to more efficiently monitor a student’s progress to proficiency in the language. For instance, she mentioned how the main goal is to learn in order to implement and then to apply.

“Keep students motivated to learn the language,” she said. “We (as educators) want them to love the class and understand its importance.”

As the fifth most spoken language in the world, Arabic is considered a critical language by the U.S. State Department because of U.S. strategic business and security interests in the Arab world.

Furthermore, knowing a second language, then, provides youth an advantage when entering the labor market and also stimulates the nation’s productivity and increases its potential and standing on a global scale.

“Arabic is one of the most used languages in businesses globally,” Hassan said. “It is very important that our students are fully bilingual and can bring use to their language in Arabic in their future careers and endeavors.” While Americans speak many languages, the Arabic language dominates as the most spoken language other than English and Spanish within the state of Michigan.