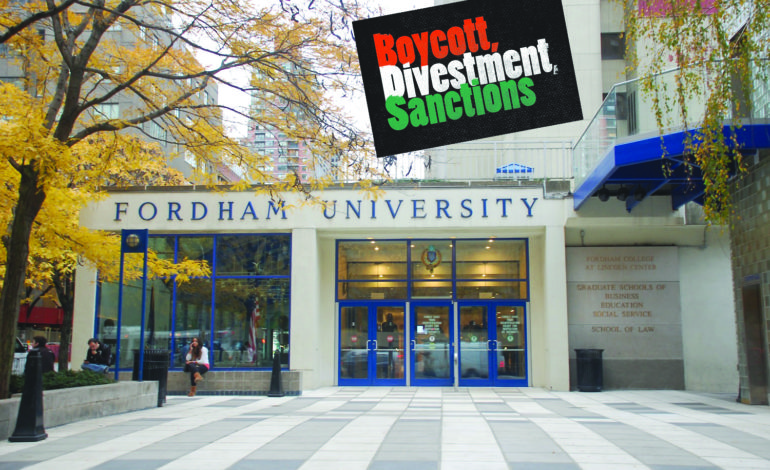 NEW YORK CITY ⁠— A landmark victory has been won by a group of students at Fordham University here, who won the right to establish a Students for Justice in Palestine (SJP) club on campus after two years of legal battles.

The student government’s approval of SJP was originally vetoed by the school in December 2016, but in April 2017 the students sued Fordham for violating its own rules, with help from the Center for Constitutional Rights, Palestine Legal and attorney Alan Levine.

Justice Nancy Bannon wrote that Fordham’s “disapproval of SJP was made in large part because the subject of SJP’s criticism is the State of Israel, rather than some other nation, in spite of the fact that SJP advocates only legal, nonviolent tactics aimed at changing Israel’s policies.”

According to a report from the Intercept in 2018, SJP members were consistently called to meetings with school administrators while attempting to organize the club and repeatedly questioned on their opinions on the Boycott, Divestment and Sanctions movement, as well as their desire to use the word “apartheid” to describe Israel.

“The administration unfairly hindered my and my fellow classmates’ abilities to advocate for the human rights of Palestinians,” said former Fordham graduate Ahmad Awad, according to Mondoweiss.

Awad is one of the students involved in the lawsuit.

“Although over 1,000 days have passed since we initiated the process for club status, I did not give up on my fight for human rights and free speech,” he said in a statement following the ruling. “I continued to advocate for justice in Palestine, and now because of Justice Bannon’s order, no Fordham student will be restricted or prohibited from advocating for justice in Palestine.”

The Palestine Legal and the Center for Constitutional Rights said the following in a statement:

“Awad, et al. v. Fordham University is the first lawsuit in the country challenging institutional censorship of students advocating for justice in Palestine, and this win marks the first major legal victory for free speech for advocates of Palestine on college campuses.”

The victory came just days after House members reintroduced a bill that would broaden the federal definition of antisemitism to include some criticisms of Israel.