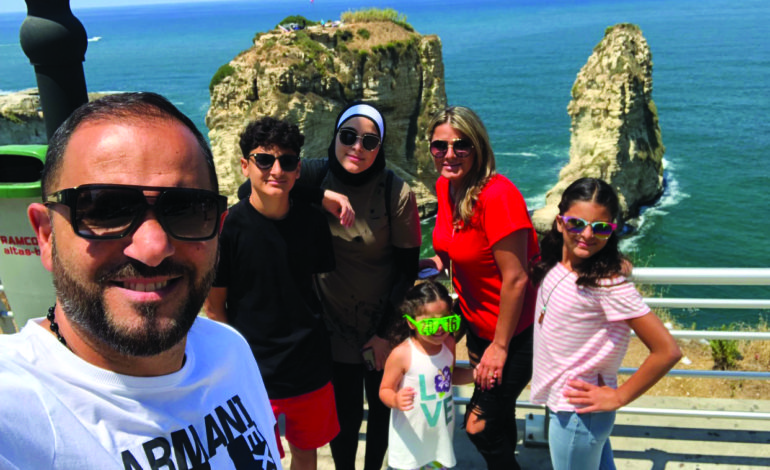 Marwan Faraj; his wife, Chirrine; daughters, Batoul, Ayat and Lamees and son Mohamad pose before the iconic rock of Raouche' in Beirut, Lebanon

DEARBORN — While Muslims are demanding respect and fighting for their rights in the West, especially in the United States, Arab American Muslim families who visit their countries of origin feel discriminated against even in the midst of other Muslims.

Marwan Faraj, a Dearborn man who was visiting Lebanon this summer, like most of Lebanese American families do every summer, said that he needs to call Beirut hotels prior to his arrival to ask if the hotel policies have restrictions on permitting women and girls wearing the headscarf on their premises.

Faraj had contacted several other hotels, which told him that they do not allow girls or women with hijabs on their properties.

However, although Faraj called the Coral Beach Hotel and Resort in Beirut, Lebanon prior to his arrival, his family still faced an issue with his daughter that led to a heated argument on the hotel premises.

“I’m not the first one to experience something like that at a resort in Beirut,” Faraj said.

“Usually when visiting Lebanon, I call the places before hand as they usually have problems with girls with hijabs [headscarfs] going into the pool,” he added.

“Although I called Coral Beach Hotel before and they said they have no problems, the lady at the reception who was checking me and my family in points at my daughter and says ‘is this one with you?'”

Faraj was very offended, he left the hotel after a heated exchange with the receptionist.

The general manager of the hotel tried reaching out to Faraj, but he did not respond. He said it was too late to “patch things.”

He subsequently responded to a message from hotel officials on Facebook. The hotel management claims that Faraj was using his daughter’s story for “personal gain”, according to Faraj’s chain of exchange messages with the hotel.

“The reason this action was taken is that all the valued comments were heading towards judging the establishment on an action that was not committed and that we felt it was an organized movement,” the hotel officials said to Faraj on Facebook.

“Our position is clear, hijab [headscarf] is welcomed and very much cherished and it’s part of our culture, which we are proud of,” the message from the hotel management said. “…However, misusing the hijab topic to create an avalanche of comments not relative to what have happened and to have personal gain is simply not acceptable.”

On the subject of women with hijabs using the swimming pool, hotel officials said, “We have mixed pools, mixed areas; and to our knowledge of our faith, when we are religiously committed we are committed and not as it suits us and when it suits us…Our faith law is clear, ladies can not mix with naked persons from other genders. Our faith law is also clear about being present in [an] area where we know involuntary touches might take place between genders when they share a crowded pool.”

“A lot of people from Dearborn go to this hotel,” Faraj said. “I wrote a letter to the minister of tourism about this, my daughter Batoul wears a hijab and she is 16-years-old and was insulted; and to face such an experience over there, she will never forget it.”

Hotel officials also said that its policies that “discriminate” against hijabi women are only “out of respect to our faith that burkinis are not allowed and not out of racism as is being portrayed.

“We never ask what’s your race upon entering the premises, nor nationality, nor religion,” hotel officials stated.

“Claiming to respect the faith and other’s religion and yet you insult and embarrass a 16-year-old girl in front of other guests simply because she wears a hijab [headscarf] by telling her she is not allowed in your pool area,” Faraj said in reply to the hotel’s message. “You are an embarrassment to the whole country.

“I am willing to go to the moon and back for my daughter,” he added, “and by you saying I am misusing this situation for personal gain, you are admitting the stupidity of your establishment.”

Faraj told The Arab American News that the way that the hotel employee is trained to talk to people wearing the headscarf “is unacceptable.”

“It was very disrespectful,” he said. “I’m willing to go the distance to not put my daughter in this situation, so there is no possible personal gain here.”