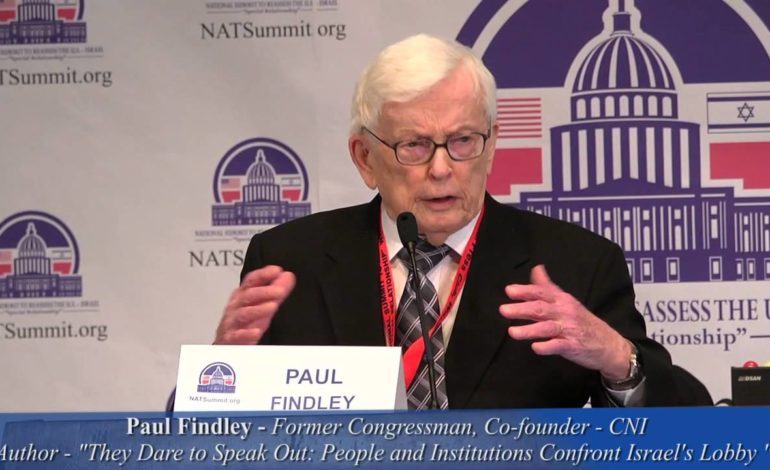 Findley, a man of extraordinary courage, died on August 9. He was 98-years-old

Paul Findley, one of the most remarkable Congressmen that the U.S. House of Representatives had produced since the Second World War, passed away on Aug 9. He was 98-years-old. He was first elected to Congress in 1960 from a district in Illinois once represented by Abraham Lincoln, his immortal hero. Findley was elected 11 times from that constituency until his defeat in 1982.

As a Congressman, he played a significant role in the formulation of the War Powers Act, which required the U.S. president to notify Congress of foreign military engagements. He was critical of wasteful Pentagon spending. He was one of a handful of early legislators who opposed the Vietnam War.

But Findley’s “notoriety” is associated with something else. He was a consistent critic of the influence of the Israel lobby over Congress. He could see how the lobby shaped U.S. policies, especially in West Asia. He was very much aware of the tactics the lobby employed to silence anyone who questioned even mildly the biasness of the U.S. position in the Israel-Palestine/Arab conflict.

Findley himself was a victim of the lobby’s vicious targeting. Because of his concern over the conflict he had visited the late Palestinian leader, Yasser Arafat, who was then regarded by the U.S. government as a “terrorist.” That visit became cannon-fodder for the Israel lobby to mount a massive campaign against Findley which was one of the main reasons for his defeat in the 1982 Congressional election.

Findley was a man of extraordinary courage. His position on Israeli occupation and justice for Palestinians and his support for the rights of Muslims in the U.S. incurred the wrath of many. He was often isolated and marginalized. But he never abandoned his principles.

Following his defeat, he wrote a couple of books about the power of the lobby in U.S. public life and how institutions and individuals were confronting the lobby. They Dare to Speak Out had a bigger impact outside the U.S. than within. His next book, Deliberate Deceptions, revealed the nexus between U.S. and Israel forged through money, corporate links and personal relationships. Findley was now perceived by the U.S. establishment as a staunch opponent of Israeli power over the U.S.

His explorations into Israeli and Zionist power in the U.S. invariably compelled him to look into how that power determined public perceptions of Islam and Muslims in general. His tentative perspective on the issue received a boost when he was invited to take part in a workshop in Penang on perceptions of Islam and Muslims in the Western media organized by JUST in October 1995. That workshop, as Findley had observed many times since, changed his outlook on not only Islam but also the West’s relationship with a civilization which often invoked negative sentiments especially among the “educated.” He began to realize that the roots of the antagonism towards the religion and its followers were deeply embedded in the West’s history and entangled with the crusades and colonialism and post-colonial structures of global power and dominance.

On his return he produced a “Friendly Note on his Muslim Neighbor”, which was widely circulated, and later authored a book entitled Silent No More that sought to demolish America’s false images of Islam and Muslims. The book sold 60,000 copies.

As Findley’s mission to combat ignorance about, and prejudice against, another civilization was beginning to make some progress, it suffered a severe setback through two major events at the start of the new century. Both the destruction of the twin towers in New York on Sept 11, 2001, which was the rationale for the U.S.-helmed “War on Terror” and the invasion of Iraq in March 2003, made bridge-building between Christians and Muslims a monumental challenge. Nonetheless, Findley persevered. He continued to lend support to the work of the Council on American-Islamic Relations and other such causes.

His last correspondence with me was in January 2016. He had written an article for the JUST Commentary on Jan 20, 2016 entitled, “Truth Seeking About Islam.” He lamented that his eyesight was failing… though his spirit was still high.

Findley was a man of extraordinary courage. The positions he adopted on Israeli power or on Palestinian rights or on justice for Muslims in the U.S. incurred the wrath of many. He was often isolated and marginalized. But he never abandoned his principles.

The tenacity with which he adhered to them was what made him a man of integrity and dignity. He knew the price would be heavy. But it was a price he was prepared to pay.

It is this – his moral conduct in the face of adversity – that will be his lasting legacy.

-Dr. Chandra Muzaffar is the president of the International Movement for a Just World. This article appeared first in The Sun Daily