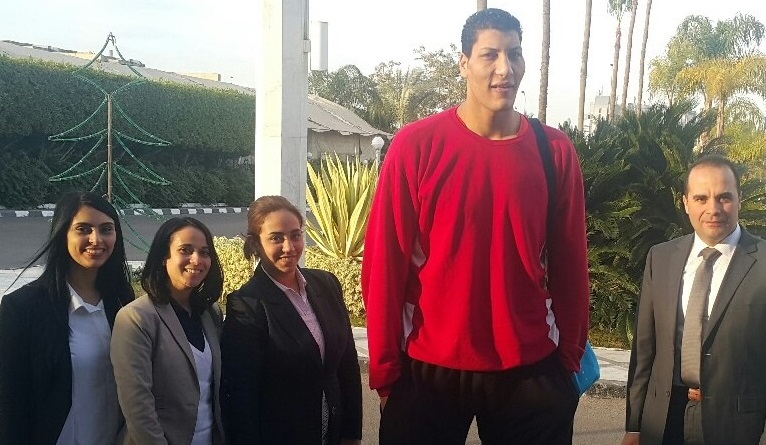 While the African Basketball League doesn’t get nearly the same attention as major leagues worldwide like the NBA, the popularity of one of its players, Egyptian center Hamad Fathy, in recent months has demonstrated the power of social media, and the captivating abilities of one of the tallest human beings on the planet.

Fathy, who stands 7-foot-7 and has been nicknamed “The Giant”, is so tall that he practically doesn’t even need to leave the ground to dunk on a 10-foot rim, drawing comparisons to NBA player Boban Marjanovic of Serbia, who is four inches shorter. Marjanovic is known as the biggest player in the NBA, but Fathy dwarfs him.

The Egyptian center signed a two-year contract with home country team Smouha Sporting Club in 2017, and video of him dunking has been seen hundreds of thousands of times, during which he makes opponents look like junior varsity players.

This 7'7" Egyptian player could give Boban some competition

In 2013, Fathy submitted his name to the NBA but went undrafted, according to his profile on RealGM.com.

But Fathy, who wears jersey number 99, has been able to showcase his skills overseas, as seen in the tweet below from the Africa Basketball League.

“Hamad Fathy aka the Giant is just unfair!” the league tweeted along with a highlight video from the previous season, which ended in May.

Even at his massive size, Fathy was also a professional handball player prior to transitioning full-time to basketball.

He played for the Egyptian national handball team in 2015 at the African Games Tournament, but was not selected to the official national team, according to a report from MSN.com.