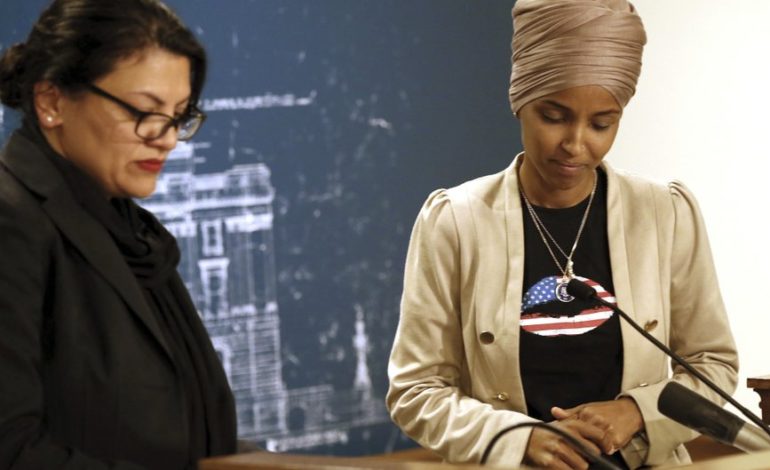 Omar made opening comments in which she clarified that, contrary to information by recent media reports and Netanyahu himself, she had planned to meet with both officials from the Israeli government and Palestinian civil society groups.

She also said that she had met with constituents from a wide range of opinions on the Israeli-Palestinian conflict and that the items on her travel itinerary resembled those of other congressional trips in the past.

“The decision to ban me and my colleague, the first two Muslim American women elected to Congress is nothing less than an attempt by an ally of the United States to suppress our ability to do our jobs as elected officials,” Omar said.

She also talked of others who had attempted to travel to the region on human rights fact-finding missions and had been denied entry by Netanyahu’s administration. She said this was routine practice for his government.

She called for a stop to the expansion of settlements on Palestinian land and ensure full rights to Palestinians if the U.S. was to give Israel aid.

Tlaib thanked Omar for inviting her to speak in Omar’s district and for her service and leadership in Congress.

The two would have travelled to Palestine and Israel today. Like Omar, Tlaib acknowledged that it was common for members of Congress to travel to the region.

“What is not common occurrence is members of Congress being barred from entering a country on these fact-finding missions unless they agree to a strict set of rules, curtailing their rights or being required to submit their itineraries for stop-by-stop pre-approval,” she said.

She told of a former congressman, Charles C. Diggs Jr. (D-MI), who had been denied entry in apartheid era South Africa in 1972. He was a representative for the same congressional district as Tlaib.

“History does have a habit of repeating itself,” she said.

She said her childhood in Detroit, with its history of civil rights and labor movements, inspired her to seek justice for Palestinian and Israeli people.

Tlaib appeared grief stricken when she talked of the humiliation her and her family experienced while attempting to visit grandparents and extended family in Palestine as a young girl.

“I watched as my mother had to go through dehumanizing checkpoints even though she was a United State citizen and proud American,” she said, while being consoled by Omar. “I was there when my sity was in a terrible car accident and my cousins and I cried so she could have access to the best hospitals, which were in Jerusalem.”

She also talked of being terrified when check points and military appeared in her ancestral village of Beit Ur al-Fauqa.

She said that the planned visit included a meeting with Israeli veterans, who were forced to participate in military occupation and wanted peace and self-determination for Palestinians.

Tlaib’s delegation had also planned to shed light on detentions and other violent methods of the Israeli military, as well as economic and physical barrier to mobility in regions like Bethlehem.

“All I can do as (my sity’s) granddaughter is to humanize her and the Palestinian people’s plight,” she said. “I know that when we can finally see them as deserving of human dignity, everyone who lives there will be able to live in peace.”

The four were invited to speak at the presser by Tlaib and Omar.