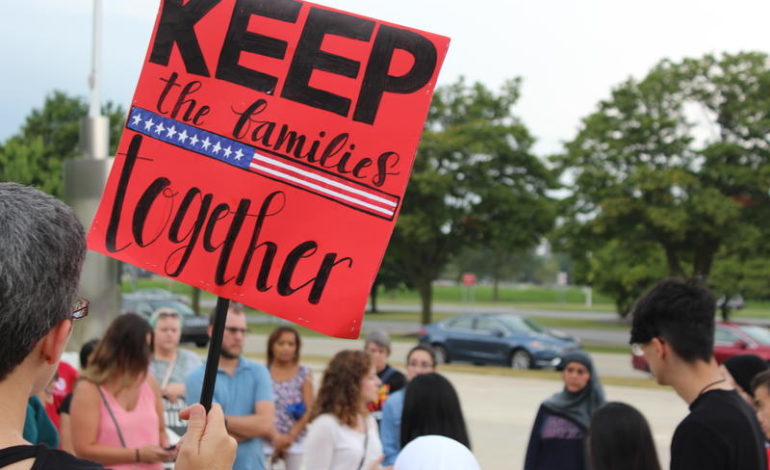 Protesters rally for an end to the ICE contract in Dearborn. Photo via Malak Silmi/Michigan Radio

DEARBORN — The Dearborn City Council announced that it will not be renewing its decade-long prisoner housing contract with Calhoun County, following two protests in the city this week against ICE (Immigration and Customs Enforcement) detentions.

“We will not be renewing at this point in time and don’t anticipate working with Calhoun County,” said Mary Landroche, director of Dearborn’s Department of Public Information.

The contract with Calhoun County would have been extended with an amount not to exceed $250,000 for sentenced prisoner housing and transportation for the fiscal year of 2020.

The city has come under fire for its cooperation with ICE and detentions of undocumented immigrants.

“We absolutely do not want to participate or take any part in what ICE does. Period,” said City Council President Susan Dabaja.

On Tuesday a protest of about 75 students and residents, organized by the Arab Student Union, was held prior to the Council meeting to raise awareness of the issue.

“We just want them to vote no,” protest organizer Jenna Kobeissi told Michigan Radio. “And that’s pretty much it. We want this to be a safe place for immigrants to come and live, whether you’re undocumented or not.”

The rally was preceded by a larger one the previous Tuesday that included speeches by local residents who have been affected by ICE deportations and local congresspeople including U.S. Reps. Rashida Tlaib (D-Detroit), Andy Levin (D-Bloomfield Hills) and Debbie Dingell (D-Dearborn).

The item was initially tabled by the City Council, but some meeting attendees, including Jenna Hassan, stood against it.

“It seemed very intentional that they didn’t want anybody to speak, because for every single other agenda item, they allowed people to just get up and speak,” Hassan said, according to a report from Michigan Radio.

A total of 1,333 ICE prisoners with final deportation orders were housed in Calhoun County last year, according to a 2018 annual report from the mayor.

The department has renewed contracts with Calhoun County and ICE for more than 10 years. As a result, Dearborn police would hold detainees for ICE in Dearborn’s 20-bed facility in an undisclosed location. In return, up to 20 long-term prisoners were sent to the Battle Creek jail.

Dearborn City Council members did not immediately respond to requests for comment.

However, some meeting attendees expressed feelings of being shut down when the topic was postponed.

The city council is now looking for other alternatives to the contract, without getting ICE involved.

“We will continue to explore our options for housing of misdemeanor prisoners outside of Wayne County due to overcrowding issues, but those options will not include an ICE component,” Councilwoman Erin Byrnes said.

-Eman Jassem contributed to this report.