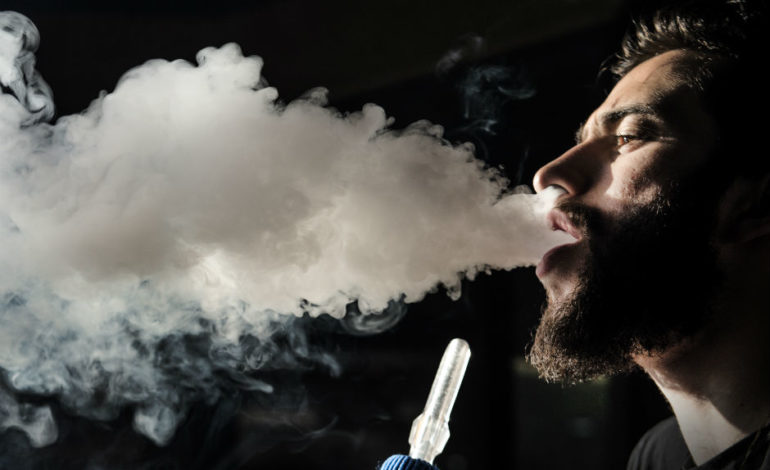 There is growing evidence that hookah smoking affects heart rate and blood pressure, with chronic use linked to an increased risk of heart disease, the American Heart Association warned

IRVINE, CA – Hookah waterpipe use has grown in popularity in recent years – 1 in 5 college students in the U.S. and Europe have tried it – but the practice could be more dangerous than other forms of smoking, according to a first-of-its-kind study by researchers at the University of California, Irvine, published recently in Aerosol Science and Technology.

Using a custom-built testing apparatus, the UCI chemists analyzed emissions during a typical communal waterpipe session and found that one draw from a pipe can contain as many noxious substances as smoke from an entire cigarette.

“Hookah mainstream smoke – that which is directly inhaled by the user – has many toxic and harmful chemicals, such as nicotine, which can lead to tobacco addiction; irritating carbonyl compounds; and benzene, a known carcinogen,” said lead author Veronique Perraud, a UCI associate project scientist in the Department of Chemistry. “And due to the greater volume inhaled for every puff and the longer duration of a smoking session, the hookah oftentimes delivers a higher dose of those chemicals to the smoker.”

The waterpipe also produced an outsized quantity of carbon monoxide, mainly from the burning of charcoal to heat the tobacco or herbal mixture in its bowl. The study refers to several cases in which hookah users have suffered from CO intoxication.

In addition to testing ordinary tobacco, the group studied a nicotine-free herbal mixture, marketed as a healthier alternative, and discovered that it had even higher levels of toxic gases present in the mainstream smoke.

While previous studies have detailed the risks of the hookah habit, the UCI project is the first to characterize ultrafine particles – those with a diameter smaller than 100 nanometers – in the inhaled smoke. Using a pair of mass spectrometers, including a unique instrument designed by the Smith Group at UCI, the scientists measured the chemical composition of both gases and solids emitted during a hookah session in real time, a key differentiation from past studies. UCI researchers (from left) James Smith, professor of chemistry; Veronique Perraud, an associate project scientist in chemistry; and Sergey Nizkorodov, professor of chemistry – among others – used a custom-built apparatus to analyze emissions during a typical hookah smoking session in real time, finding that one draw from a pipe can contain as many noxious substances as smoke from an entire cigarette. Steve Zylius / UCI

“Typically, researchers would collect samples from a filter capturing smoke and particles from an entire session, rendering one data point,” Perraud said. “But through our technique of testing emissions in the beginning, midpoint and end of a smoking session, we were able to show that a smoker is exposed to a higher quantity of ultrafine particles during the first 10 minutes compared to the rest of the time.”

She said these miniscule particles can pose significant health risks because they can make their way deep into the pulmonary system, and the smallest ones can readily cross the blood-brain barrier.

“One of the big myths about hookah usage is that the water in the bowl actually filters out the toxic chemicals, providing a shield for the smoker,” Perraud noted. “In the study, we show that this is not the case for most of the gases and that, possibly due to its cooling effect, water actually promotes ultrafine particle formation.”

Another difference between hookah and cigarette smoking is the temperature at which the tobacco is combusted. The cooler-burning contents of the hookah bowl produced less complex chemical compositions than occur in cigarette smoke but a heightened amount of sugar derivatives, as well as glycerol. When heated, this normally harmless substance that’s used as a food additive decomposes, creating small aldehydes that are irritants and potential carcinogens.

This project to characterize the chemical composition of hookah emissions, carried out primarily in UCI’s Department of Chemistry, is the first of a two-part study funded by the National Institutes of Health. The second phase, in which the specific health effects of waterpipe smoking are examined, is currently underway in UCI’s School of Medicine.

– University of California, Irvine was founded in 1965. UCI is the youngest member of the prestigious Association of American Universities,  with more than 36,000 students and offers 222 degree programs. For more information on UCI, visit www.uci.edu.