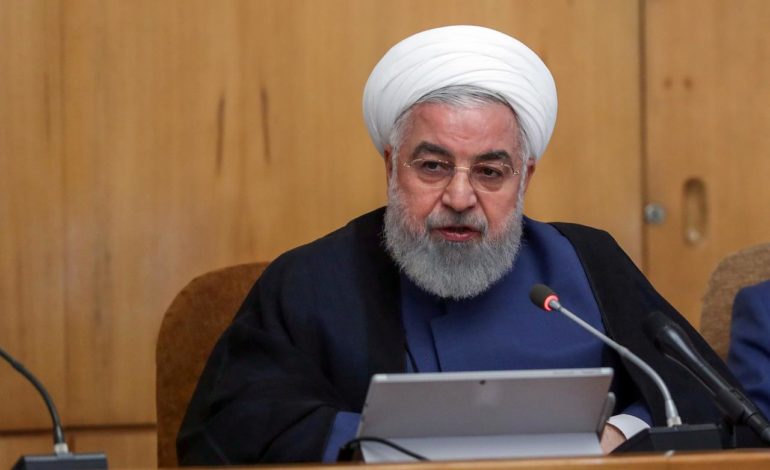 TEHRAN — If Iran’s oil exports are cut to zero, international waterways will not have the same security as before, Iranian President Hassan Rouhani said on Wednesday at a meeting with Supreme Leader Ayatollah Ali Khamenei, according to Khamenei’s official website.

“World powers know that in the case that oil is completely sanctioned and Iran’s oil exports are brought down to zero, international waterways can’t have the same security as before,” Rouhani said. “So unilateral pressure against Iran can’t be to their advantage and won’t guarantee their security in the region and the world.”

Meanwhile, France’s President Emmanuel Macron said on Wednesday he would meet Iranian officials ahead of this weekend’s G7 summit and make proposals aimed at de-escalating tensions between Washington and Tehran.

“In the coming hours before the G7 I will have meetings with the Iranians and propose ideas,” Macron told reporters.

Leaders from the United States, Britain, France, Germany, Italy, Canada, Japan and the EU will attend the Group of Seven meeting in the southwestern French resort of Biarritz.

With punishing U.S. sanctions squeezing its economy, Iran is demanding that European powers that are party to the nuclear accord — France, Britain and Germany — do more to protect the financial gains Tehran stood to make under the accord.

“We have made proposals either for a softening of sanctions or a compensation mechanism to enable the Iranian people to live better,” Macron said, without giving more details.

The United States has made no indication it will ease any sanctions and it was unclear what kind of compensation mechanism Macron was referring to.

Macron said that in return he would expect Iran to comply fully with the nuclear deal and for Iran to engage in new negotiations that would include its ballistic missile program and regional activities.

“There are proposals on the table, both from the French and the Iranian side, and we are going to work on those proposals tomorrow,” he said

Zarif also warned against U.S. efforts to create a security mission, which so far Britain, Australia and Bahrain have joined, to guard shipping in the Strait of Hormuz, a vital gateway for global oil supplies.

“It’s clear that the U.S.’ intention…(of having a) naval presence in the Persian Gulf is to counter Iran,” Zarif said. “…Don’t expect us to remain quiet when somebody comes to our waters and threatens us.”