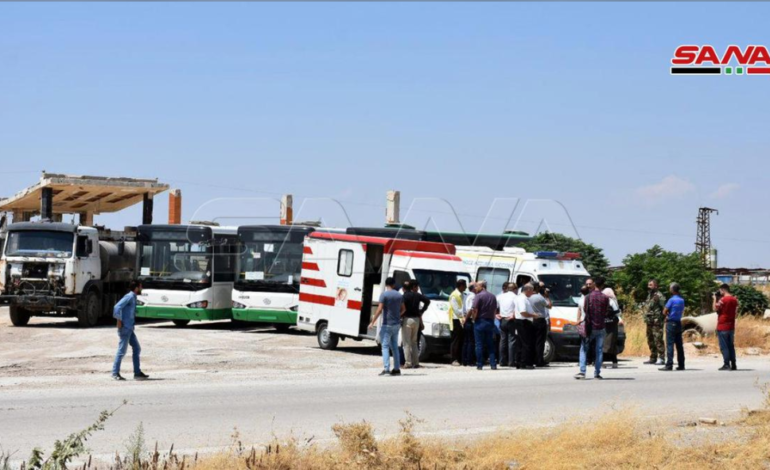 Buses and ambulances are seen as Syrian government forces open a corridor for people who want to leave insurgent territory in northwest Syria, in the town of Soran, Hama, Syria in this handout released by SANA on August 22. Watermarks provided at source. SANA/Handout via REUTERS

BEIRUT – Syrian government forces opened a corridor on Thursday for people who want to leave insurgent territory in northwest Syria, where an army offensive has gained ground.

Tens of thousands of people have fled towards the Turkish border in recent days as air and ground attacks battered parts of Idlib and Hama in the northwest, the last big rebel stronghold.

After the collapse of a brief ceasefire this month, Syrian army troops, backed by Russia, have now marched into a town in Idlib province in rebel hands since 2014.

The United Nations says hundreds of people have been killed since the offensive began in late April. More than 500,000 people have been uprooted since, it says. Most escaped deeper into the rebel bastion and towards the border, while about 30,000 have fled into government territory.

“The Syrian Arab Republic announces the opening of a humanitarian corridor in the (town) of Soran,” state news agency SANA said, citing a foreign ministry source.

The corridor would allow people to leave the southern part of Idlib and the north of Hama. Those who come out will receive food, shelter and healthcare, it said. Smoke billows above buildings during a reported air strike by the Syrian army on Khan Sheikhun on Monday. AFP

The head of the state’s reconciliation committee, Ali Haidar, said getting civilians out would help troops take “military and security measures” in the region. He repeated the Damascus government’s vow to “liberate every inch of Syria.”

Moscow and Damascus say they are responding to militant attacks by the former Nusra Front, a jihadist alliance now known as Hayat Tahrir al-Sham. It is the dominant force in Idlib, where Turkey-backed factions also have a presence.

Under its deals with Russia and Iran, Turkey has forces stationed at a dozen military posts in Idlib. The latest army advances in the northwest have put Turkish troops in the firing line and threaten Ankara’s hopes of preventing a new wave of refugees on its border.

Rebel groups have withdrawn from Khan Sheikhun in northwest Syria, clearing the way for the Syrian army to enter the town, in a milestone moment in the war for Idlib province, the country’s last major rebel stronghold.