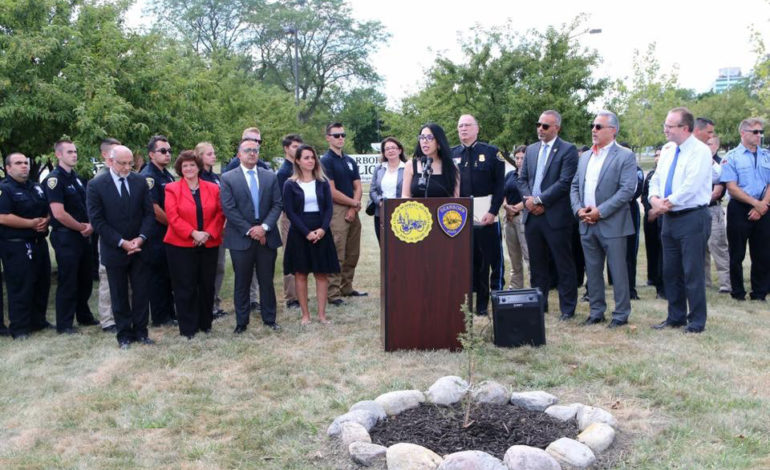 DEARBORN — In the spirit of giving, appreciation and the rooted historic Lebanese presence in the United States of America, Suzan Mouzi-Yassine, the Michigan-based Lebanese counsel general in the Midwest, decided to end her diplomatic service to the Lebanese Americans in Michigan by planting a cedar tree in Birmingham, where she resides, and in front of the police station in Dearborn, home of the largest single concentration of Lebanese Americans.

The two events that took place last Friday were a symbolic gift for the Lebanese American community in Michigan from the counsel general as she prepare to return to Lebanon with her term of service abroad having concluded.

She took charge of the mission in the Detroit area, which serves the Midwest, in January 2018.

The ceremony started with a speech by Haddad, followed by City Council President Susan Dabaja and Judge Salamey.

The initiative of planting the symbolic cedar tree in the heart of Dearborn was to remind the future generations of Lebanese Americans of their proud history, cultural identity and the long-lasting friendship between Lebanon and the U.S.A.

The event concluded with a speech by Mouzi-Yassine, who shed light on the significance of the cedar tree in the Lebanese culture, where it serves as a “sign of Lebanon’s perseverance and determination” and as an “emblem of openness and building bridges among nations.

“Its sturdy and durable wood was once used in trade and enhancing relations between our ancestors the Phoenicians and the rest of the world,” she said.

“Lebanese emigrants do resemble this tree,” she added. “Their roots were plucked from the hills of Lebanon, yet they are deeply and fruitfully rooted here. They have nurtured the land onto which they’ve settled.”

She added that not only is the cedar tree the symbol of the Lebanese flag, it is also a slogan of the country’s solidity and resilience in the face of adversity and crisis.

“The tree is a slogan of openness and bridges between nations,” she said… “It was a staple used by the Phoenicians to trade and strengthen relations with other peoples and kingdoms.”

Finally, the consul general presented thanks to the City Council and everyone involved in this initiative. She stressed that the tree planted in Dearborn is a, “testimony to the pride of the Lebanese community for its cultural identity on the one hand and the solidarity of the Lebanese-American relations on the other.”

Mouzi-Yassine explained to The Arab American News the cultural and heritage significance of the cedar tree.

“I wanted to conclude my mission here by planting cedar trees so that they can bring pride to the expatriates here, reminding them of their cultural identity as it embodies the state of coexistence and synchronization between the Lebanese roots and the American dream,” she said. “…We see it in our gracious community and in its resounding presence in various fields.”

The initiative will be concluded with the planting of another tree at Oakland University.