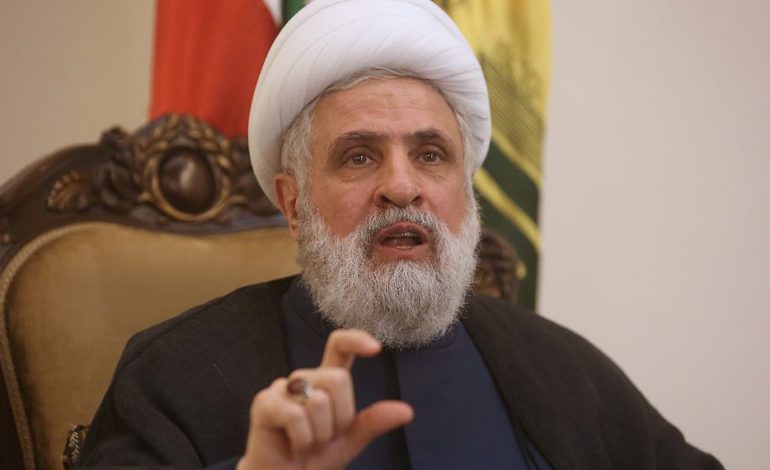 Qassem: We want the strike to be a surprise

BEIRUT — Hezbollah said it would respond with a “surprise” strike against Israel after drones crashed in Lebanon at the weekend, but it also said a new full-out war between the longtime adversaries remains unlikely.

Adding to the growing tension between Israel and Iran-backed groups in Syria, Lebanon and Iraq, the Lebanese army opened fire on Wednesday, in the south of the country, at two of three Israeli drones breaching Lebanese airspace near the Israeli border. Israel said the drones were unharmed.

Israeli aircraft regularly enter Lebanese airspace, but this is a rare case of the army targeting one. Beirut has repeatedly complained to the United Nations about Israel, which Lebanon considers an enemy country, breaching its airspace.

The rare incident took place after President Michel Aoun said on Monday that Lebanon had a right to defend itself after two drones the Lebanese army said were Israeli crashed on Sunday in the Hezbollah-dominated southern suburbs of Beirut.

Israel has not claimed responsibility for the two drones that crashed. One of them exploded, causing some damage to Hezbollah’s media center in the district, but nobody was hurt.

“I rule out that the atmosphere is one of war, it is one of a response to an attack,” Hezbollah deputy leader Sheikh Naim Qassem said in a TV interview on Tuesday night. “Everything will be decided at its time.”

Hezbollah is planning a “calculated strike” but seeks to avoid a new war with Israel, two sources allied to the Shi’a Muslim group, which fought a deadly month-long war with Israel in 2006, also told Reuters earlier on Tuesday. A regional security official said the drone incident was “a strike that dealt a blow to Hezbollah’s capabilities in the realm of precision-missile manufacturing.”

“Israel’s message to Hezbollah here, writ large, was, Keep manufacturing, and we will keep hitting you.”

Asked what would happen if Hezbollah escalates after responding, the official said, “I imagine that Israel would then step up its strikes and wipe out this capability altogether. The details of these sites are known. The ball would now appear to be in Hezbollah’s court.”

Despite signs that Israel and Hezbollah do not want a new full-scale conflict, tensions over the drones and an air raid in Syria that Israel says thwarted an Iranian attack have emerged at a sensitive time in the Middle East.

Israeli Prime Minister Benjamin Netanyahu is trying to appear decisive ahead of elections in three weeks. Iran and the United States are at odds over a 2015 nuclear deal. Shi’a militias in Iraq, many of whom are backed by Iran, blame recent blasts at their weapons depots on the United States and Israel.

Qassem: We want the strike to be a surprise

Precise details about where Sunday’s drones were fired from have yet to emerge. In response to questions about the origin or target of the drones, Qassem did not give details in the interview with Russia’s RT Arabic channel.

He added that Hezbollah, which says the drones were rigged with explosives, saw it as an attack that it must respond to, so that Israel does not upset the status quo and set its own terms.

“We want the strike to be a surprise…and so there is no interest in diving into the details,” he said. “The coming days will reveal this.”

In his speeches over the past year, Nasrallah has often said an all-out war with Israel was unlikely.

Regional sources say Israel and Hezbollah have since formed an unwritten understanding that while they can exchange fire within Syria, they must avoid attacks within Lebanon or Israel lest that escalates to war.

Israel, which sees the heavily armed Hezbollah as the biggest threat across its border, has also grown alarmed by the rising influence of its foe Iran in Syria.