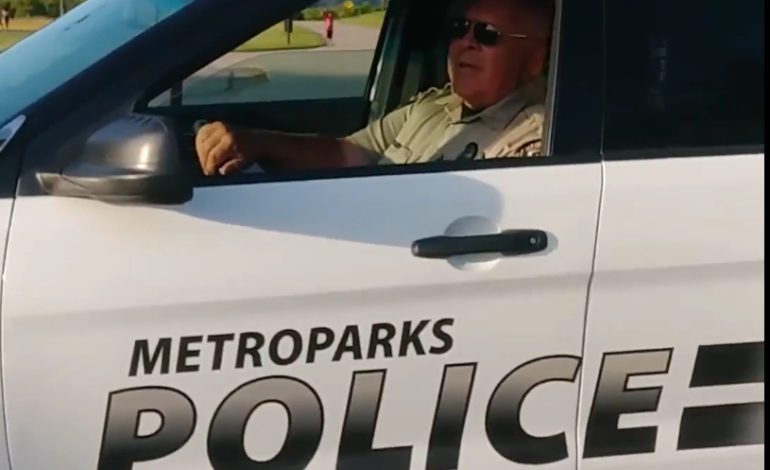 The officer, employed at the metropark for more than two years, was found to be in violation of rules of conduct that state he “shall be courteous and tactful.”

BROWNSTOWN, MI — A police officer has been found in violation of department policies for not being “courteous” or “exemplary” following a verbal argument with an Arab American man at Lake Erie Metropolitan Park in Brownstown Township on Sunday, June 30.

The Lake Erie Metropark officer was accused of making a discriminatory remark to the man, whom the The Arab American news identified as Hadi Dagher, but an internal investigation into the incident found his comment “unnecessary”, but not “racist.”

The officer was placed on leave while an internal investigation was underway on July 6. He returned to work on Aug. 9.

The incident was captured on a cellphone video. The aftermath was videotaped and posted on Facebook on Monday, July 1, before it went viral on social media.

A copy of the Huron Clinton Metropolitan Authority probe was released to The News-Herald after a Freedom of Information request was filed.

The officer had been accused of telling the Arab American family to “go back where you came from” after a heated exchange of words.

A nearby young patron in the park accused the officer of making the comment.

In a statement to police, the officer said he actually told Dagher, “If you can drive like that in Illinois, then go back there” after seeing him driving erratically and hearing him make a remark about not wanting to come back to the park again.

The probe concluded that there was not a “preponderance of evidence” to support the accusation that the officer expressed “prejudiced words or gestures” with regard to race or national origin toward the Arab American man.

Nevertheless, the investigative report said the veteran officer should have understood that making “an unneeded comment” would escalate the situation when Dagher and his family actually were in the process of leaving the park.

The officer, employed at the metropark for more than two years, was found to be in violation of rules of conduct that state he “shall be courteous and tactful” and “shall maintain exemplary military bearing.”

During his interview with police, Dagher, who was at the park with members of his immediate family, told officers who were investigating the incident that he believes the comment, which he again said he did not hear, was directed at his Middle Eastern heritage, according to The News-Herald.

Dagher said he has no ill will toward the officer and does not want to hurt the officer’s ability to provide for his family or see him be fired. He said he just wanted to be treated with respect.

The officer said Dagher’s wife came to his window and apologized for her husband’s behavior, saying he was having a bad day due to it being hot and their baby crying, The News-Herald reports.

The police officer said he does not see how his comment could be taken as racist, but could understand if he had not said “Illinois.”

While the investigation determined the officer’s comments were not based on race or ethnicity, it did say that the entire situation could have been avoided if the officer had “used better judgment and not made a comment at all.”

It said there was “no good reason” to make the comment and most reasonable officers understand the the “environment and context of their surroundings” when they take action. It said he should have understood the comment could escalate things.