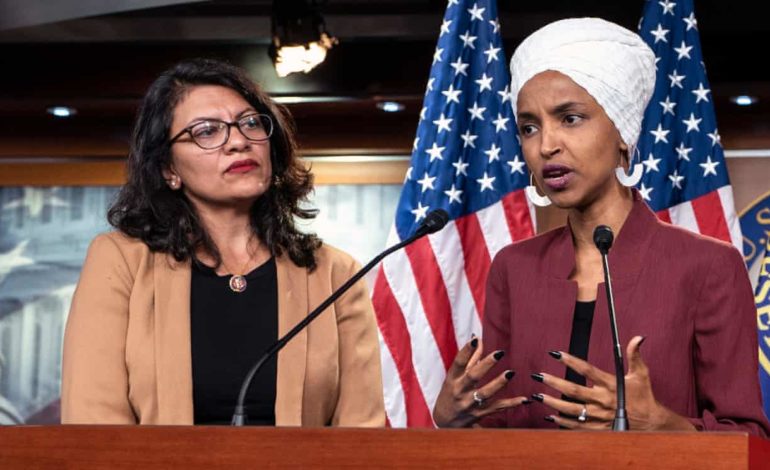 Israel's ban on Tlaib and Omar has backfired according to prominent Democrats and BDS activists. Photo via Jim Lo Scalzo/EPA

A group of more than 70 Republican and Democratic members of Congress traveled to Israel on a delegation sponsored by the American Israel Public Affairs Committee (AIPAC) earlier this month, but the annual trip was far more noteworthy for those who didn’t make it; namely U.S. Reps. Rashida Tlaib (D-Detroit) and Ilhan Omar (D-MN).

The pioneering Muslim American congresswomen were barred from embarking on their proposed “Delegation to Palestine” trip scheduled for August 17, during which Tlaib planned to visit her 90-year-old Palestinian grandmother, whom she hasn’t seen for a decade according to a report from Truthout.

Despite the setback, the glaring omission of Tlaib and Omar from the trip has emboldened the BDS movement and highlighted a growing rift among both members of Congress and AIPAC.

A recent survey shows that a majority of Democrats support sanctions against Israel over settlements, even as the House votes overwhelmingly to condemn the Boycott, Divestment and Sanctions campaign

Hardly any of the 41 Democratic Party visitors tweeted about the AIPAC trip, in stark contrast to the 31 Republicans’ barrage of military-themed social media posts.

“The absence of chatter from the Democrats obviously reflects the misgivings that the Democratic base has about the special relationship between the U.S. and Israel,” Philip Weiss and Michael Arria wrote on the website Mondoweiss.

“A recent survey shows that a majority of Democrats support sanctions against Israel over settlements, even as the House votes overwhelmingly to condemn the Boycott, Divestment and Sanctions campaign.”

Congressional trips to Israel are funded by AIPAC to strengthen its “special relationship” with the United States, to the tune of $3.8 billion in military aid annually.

But the occupation of Palestine, which includes the continued building of internationally illegal settlements, is allowed to continue in large part because of a media blackout.

By planning the trip, Tlaib has managed to shine light on an area that has been otherwise ignored, strengthening the BDS movement through sheer force of will.

Tlaib was offered a deal to continue the trip on the condition that she remain silent about Israel’s mistreatment of Palestinians, but she refused and cancelled it instead.

“Visiting my grandmother under these oppressive conditions meant to humiliate me would break my grandmother’s heart,” she said. “Silencing me with treatment to make me feel less-than is not what she wants for me – it would kill a piece of me that always stands up against racism and injustice.

“Being silent and not condemning the human rights violations of the Israeli government is a disservice to all who live there, including my incredibly strong and loving grandmother.”

“We cannot let Trump and Netanyahu succeed in hiding the cruel reality of the occupation from us,” she added, while expressing “strength and solidarity” with Tlaib.

Sen. Bernie Sanders (I-VT), a 2016 presidential candidate who is mounting a 2020 campaign, also leveled criticism at the travel ban and bloated U.S. spending on Israel.

“The idea that a member of the United States Congress cannot visit a nation which, by the way, we support to the tune of billions and billions of dollars is clearly an outrage,” he said.

“And if Israel doesn’t want members of the United States Congress to visit their country to get a firsthand look at what’s going on…maybe (Netanyahu) can respectfully decline the billions of dollars that we give to Israel.”

While most Democratic members of Congress barely spoke about the AIPAC trip, other prominent Democrats joined in the criticism.

Tlaib and Omar may not have exposed the reality of life in occupied Palestine, but they have skillfully managed to focus attention on the BDS movement like never before.

“Israel doesn’t advance its case as a tolerant democracy or unwavering U.S. ally by barring elected members of Congress from visiting because of their political views,” said Warren, who is also running for president.

“No democracy should deny entry to visitors based on the content of their ideas—even ideas they strongly object to,” he wrote.

Netanyahu defended his decision, saying the sole purpose of Tlaib and Omar’s visit was “to damage Israel and foment against Israel.”

But for those who have studied the cruel reality of the Israeli occupation and the growing chorus of voices united in favor of a BDS movement that has been met with resistance in the form of laws against it in recent months, the reality of the situation is clear: Tlaib and Omar have once again exposed Israel’s all-encompassing fear of direct, honest media coverage.

“Israel’s refusal to allow members of the U.S. Congress entry into Israel-Palestine without muzzling them backfired,” wrote Marjorie Cohn in Truthout.

“It has garnered widespread criticism, even by AIPAC, and focused the national discourse on the Boycott, Divestment and Sanctions Movement (BDS), which Tlaib and Omar support.”

“We disagree with Reps. Omar and Tlaib’s support for the anti-Israel and anti-peace BDS movement, along with Rep. Tlaib’s calls for a one-state solution,” AIPAC tweeted earlier this month.

“We also believe every member of Congress should be able to visit and experience our democratic ally Israel firsthand,” the organization added, exposing split allegiances within.

Tlaib and Omar may not have exposed the reality of life in occupied Palestine, but they have skillfully managed to focus attention on the BDS movement like never before.

“This is a moment that is an opportunity and an obligation to see with clear eyes what is and has been happening to Palestinians for many decades,” Stefanie Fox, deputy director of the Jewish Voice for Peace, a Jewish American organization favoring BDS, told the Daily Beast.

“The fact that the support of two members of Congress for BDS sparked this controversy is seen as a sign of how far the movement has come. For the first time, it has vocal, high-profile advocates in federal office who are eager to challenge Capitol Hill’s long-standing, unequivocal support for the state of Israel.

“It’s quite remarkable,” Fox added, “to see the wave cresting.”