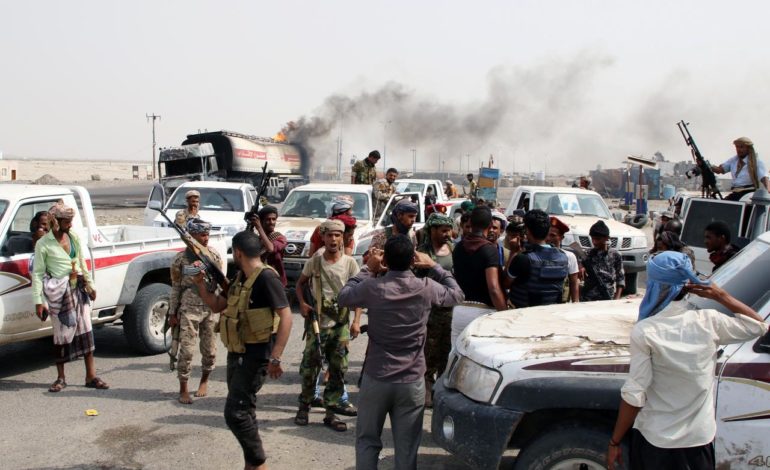 ADEN – The United Arab Emirates carried out air strikes against government forces in South Yemen on Thursday in support of southern separatists who have deployed reinforcements to take back control of the port of Aden from their supposed allies in the Saudi-led coalition.

The UAE, the second foreign power in the coalition, said it carried out air strikes against “terrorist organizations” that attacked Saudi-led coalition forces at Aden airport.

“The recent aggravation in offensives against the Arab Coalition forces and civilians pose a menacing threat to the security of the coalition,” the UAE said in a statement published by WAM news agency. “This in turn has necessitated precise and direct air strikes on the 28th and 29th August, 2019 against terrorist militias.”

Yemeni President Abd-Rabbu Mansour Hadi called on Saudi Arabia to intervene to stop what he called UAE interference and support for separatists here battling to take over Aden.

He added in a statement posted by state news agency SABA on Thursday that government forces had withdrawn from Aden to prevent the city from being destroyed, following the UAE air strikes that left dozens killed and wounded.

Yemen’s Defense Ministry said in a statement that more than 300 people were killed and wounded by air strikes by UAE war planes on Aden and Abyan Province.

Earlier on Thursday, Southern Yemeni separatists brought in reinforcements to bolster their positions in Aden, a day after heavy fighting between the separatists and government forces with whom they were previously allied.

Sporadic clashes broke out across Aden during the day and fighters from both sides patrolled deserted streets, residents said. Shops, restaurants and businesses were closed.

The internationally recognized government of President Hadi, based in Aden since it was ousted from the capital Sanaa by Iran-aligned Houthi forces in 2014, said on Wednesday it had recaptured Aden airport from the separatists and controlled most of the city. Its foes disputed the claim.

The outbreak of hostilities between the two sides is the latest twist in a multi-faceted war in Yemen pitting several factions and armies against each other.

A Western-armed, Sunni Muslim coalition led by Saudi Arabia intervened in Yemen in March 2015 against the Houthis, and the southern separatist allied themselves with the coalition.

But the United Arab Emirates has fallen out with Hadi and withdrawn many of its ground forces, prompting the separatists of the UAE-backed Southern Transitional Council (STC) to try to gain control of Aden.

On Thursday, the STC said some of its troops positioned on the outskirts of the Red Sea port city of Hodeidah, which is under Houthi control, had returned to Aden to join the battle against Hadi’s forces.