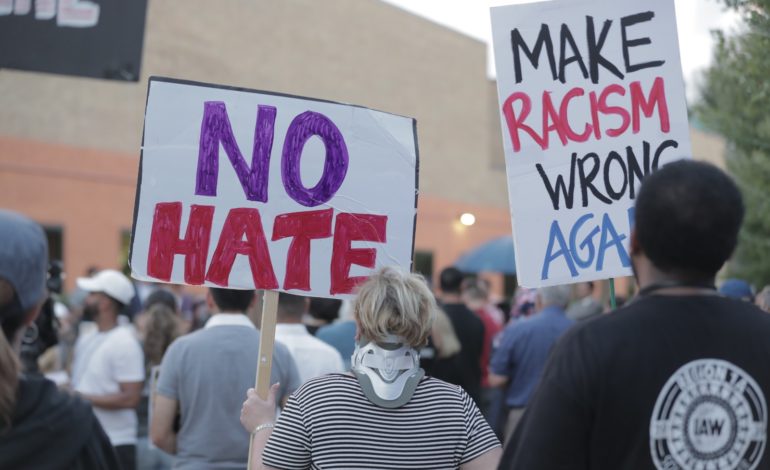 Dingell organized the event after a recent rise in hateful and discriminatory rhetoric that she felt directly affected members of her own district. All photos by Imad Muhammed/The Arab American News

The rally was hosted by Take On Hate, a non-profit organization, and was organized and facilitated by Dingell’s office.

The event, held at University of Michigan–Dearborn, also brought together faith leaders and anti-discrimination organizations in a show of solidarity amongst Michigan diverse communities.

Dingell organized the event after a recent national rise in hateful and discriminatory rhetoric that she felt directly affected members of her own district.

Opening remarks were given by UM-Dearborn’s vice chancellor Kenneth Kettenbeil who assured the audience that tolerance and respect were core values the university espoused and that bigotry had no place on the university’s campus.

Muslim, Jewish and Christian members of clergy, including Imam Mohammad Ali Elahi of the Islamic House of Wisdom in Dearborn, called for unity and an end to violence based on differences.

Amongst the more than 40 organizations and allies invited to the rally, Hammoud represented Michigan Attorney General Dana Nessel’s office. Nessel, she assured, was there in spirit and determination.

“Those who want to bring hate under this flag are the true invaders of this country,” Hammoud said. “It is remarkable to be surrounded by so many people who dare to envision a better community, a better country (and) a better world.”

Levin urged spectators to focus on love and comradery and chose a unifying message from the Torah to bolster his point.

“Loving the stranger as yourself doesn’t mean loving yourself for who you are,” he said. “It means love the stranger for who they are.”

He also spoke of his admiration for Dingell, Tlaib and other female members of Congress.

Tlaib took to the stage with standing ovation and supportive cheers from the crowd. The weight of hateful speech lobed at the Congresswoman from Detroit could be felt that evening, as she spoke to the crowd just weeks after fighting racist remarks made by President Trump, not to mention a highly publicized travel ban.

“I feel the love, the beautiful energy all around right now, and it is incredibly powerful and fuels me to work even harder to outwork the hate we see every single day,” she said. “We are disconnected and are not connecting from a place of love and a place of really trying to bring us all together.

“I grew up in an America where every Black (mother) was my mother, and a pastor, no matter that I wasn’t of the same faith, brought me in to his church (and) home. That is the incredible story that is yet to be told. That’s how we can take on hate.”

“As they try to dehumanize us, speak up, as they try to attack your neighbors, speak up,” she added. “I don’t care if it’s my African American brother down the street that is being targeted because anti-Blackness is so real in our country, or if it’s my LGBTQ sister. Please know that there are more of us than them.”

“This is not (a partisan issue) for me,” Dingell said as she made the evening’s concluding remarks. “We are not Democrats, we are not Republicans, we are Americans.

“9/11 was a time in this country that was the worst time,” she said. “But in this community, the broader community in Michigan, we knew what we stood for. We were not going to let communities be pitted against each other. The Jewish, Muslim, African American and the Hispanic community, all groups that are here with the inter-faith community came together and stood in solidarity and stood up to hate.”