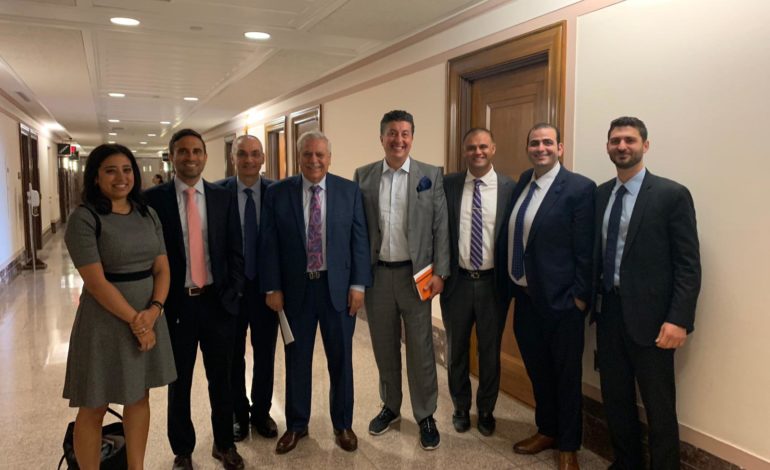 Arab American representatives in a group photo after three back-to-back meetings with federal law enforcement officials from DHS, TSA and CBP in Washington, D.C. in the U.S. Senate building, on Thursday, August 15. - Photo by The Arab American News

WASHINGTON, D.C. – In an ongoing effort to address concerns over the use of a so-called terrorist watchlist for individuals, many of whom are disproportionately Arab American, suspected of being national security hazards, U.S. Sen. Gary Peters (D-MI) organized a meeting with representatives from both the Arab American community and federal officials in Washington last month.

BRIDGES is a partnership between federal law enforcement agencies and leaders in the Arab American and Middle Eastern communities in the Metro Detroit region. It was established shortly after the September 11, 2001 terrorist attacks to facilitate open discussion through regular meetings to address pertinent issues and concerns of the Arab American and Chaldean communities.

Though many incidents of outright discrimination and profiling have come to the fore in the years following 9/11, travel restrictions forced on Arab Americans have been a persistent and nagging issue that has affected trust in the federal government in ethnic communities.

Those who find their names on this list are questioned at airports with no recourse or legal representation at their side. They are often asked to divulge personal information or declare political allegiances.

The list of about 1.2 million names has vague and unclear standards for inclusion and there is no official word on how one can take their name off of it. At the meeting in the Dirksen Senate Office Building, issues related to the list were raised by members of the Arab American community

Representatives also questioned why a disproportionate amount of attention was given to citizens arriving into Detroit from overseas, compared to other major U.S. cities.

“I felt like our meeting was genuine and our concerns were taken seriously,” Hammoud said. “I am hopeful that our discussions will lead to some change.”

“We’ve been trying for years to find a way to address the community’s issues with the watch list,” Nasser Beydoun, co-chair of BRIDGES, said. “We were having very limited success on the local front. We thought it would be a good idea to meet with policy makers in D.C.”

Beydoun said the meeting was unique, though the delegation was met with opaqueness and no concrete solutions for important issues like the no-fly list.

Peters’ office is currently working on a follow up meeting. He previously met with community members in March to discuss the topic.

“Michigan is home to vibrant communities from around the world, and every person deserves to be treated with dignity and respect when traveling,” Peters said. “I was honored to help convene these discussions, and I hope they will serve as an important step in addressing the concerns raised by Michiganders who have been repeatedly subjected to these lengthy and intrusive secondary screenings. The Department of Homeland Security can and must do more to address these concerns directly while working to make travel for all Americans safe, secure and efficient.”

Abed Ayoub, ADC’s national legal and policy director, highlighted that this meeting was part of an ongoing discussion.

“(Ultimately) we need to see more actions and less meetings,” he said. “While we appreciate the meetings and steps taken by Senator Peters, we need more of our input being implemented by the federal government.”

News came this week that a federal judge in Virginia has deemed the list to be in violation the rights of American citizens. The decision is seen by the Council on American Islamic Relations (CAIR), which brought the challenge up in court, as a critical win.

CAIR plans to ask the judge to order the government to limit the compilation and use of the list.