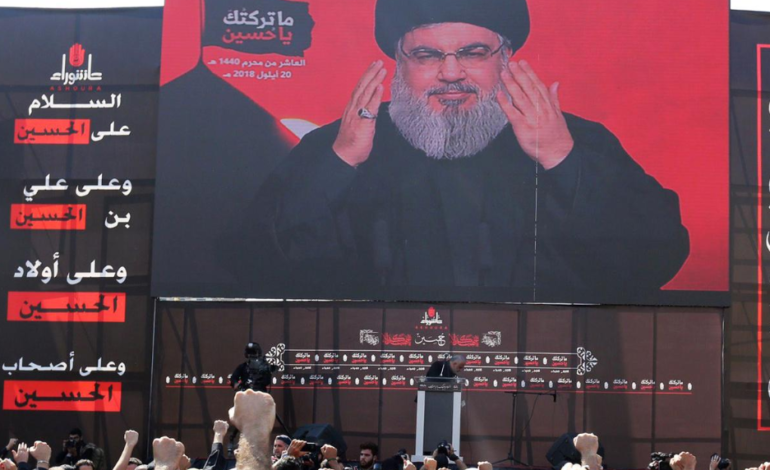 BEIRUT ⁠— The leader of Hezbollah in Lebanon said on Monday that a flare-up at the border with Israel was over, but also warned that a “new phase” has begun in which his group no longer has red lines.

In a televised speech, Sayyed Hassan Nasrallah said that the new focus would be on targeting Israeli drones that enter his country’s airspace, and that the task would be handled by fighters in the field, a report from Reuters said.

The speech referenced events on Sunday during which cross-border fire was exchanged and a drone attack was carried out in a Hezbollah-controlled suburb of Beirut.

Missiles fired into northern Israel on Sunday sent a “clear message that if you attack, then all your border, your forces and your settlements at the border and (deep inside) will be at risk,” he said.

Nasrallah was defiant as usual, but perception in the region is that the longtime adversaries privately want to avoid war during a time of high regional tensions.

Israel reportedly faked soldier injuries during the exchange on Sunday in order to dampen any inclination of Hezbollah to escalate their attacks. No casualties were said to have resulted from the attacks.

Hezbollah said it had destroyed an Israeli armored vehicle, killing and wounding those inside, and it broadcast what it said was footage of two missiles hitting a moving vehicle.

“We no longer have red lines”

Nasrallah added that the operation was the first in a long time targeting Israel across the border.

“This is no longer a red line,” the Hezbollah chief said. “I tell the Israelis, we no longer have red lines because you changed the rules of engagement.”

Hezbollah also said that two of its men were killed in an Israeli airstrike in Syria last week, where its fighters have been assisting Syrian President Bashar al-Assad. Israel said its attack thwarted an Iran-led attack plot against it.

A threat against Lebanon was also reportedly leveled by Israeli Foreign Minister Israel Katz, who was said to have asked Germany to tell Lebanon that if it does not stem Hezbollah’s activity against Israel, “Lebanon in its entirety will be struck and badly damaged.”

In a Twitter video statement on Monday, Prime Minister Benjamin Netanyahu spoke on the conflict.

The prevailing thought is that neither Israel nor Lebanon wants war, according to Maha Yahya, director of the Carnegie Middle East Center in Beirut.

Speaking to CNBC in an exclusive interview, Lebanese Prime Minister Saad Hariri attempted to distance his government from Hezbollah, saying the group is a “not a Lebanese problem, it’s a regional problem.”

The group holds positions within the Lebanese government, however.

Hariri also acknowledged his limitations in his ability to rein in the group.

“I am a pragmatic person, and I know my limits and I know the limits of this region,”Hariri told CNBC. “If people were serious about this issue, they would have done things 10, 15, 20, 30 years ago.”