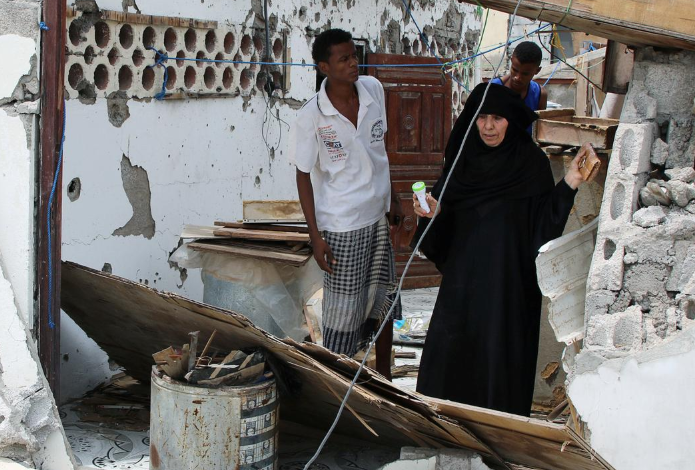 A woman checks her house during clashes between separatists and government forces in Yemen last month. Photo via Fawaz Salman/Reuters

RIYADH/DUBAI — Local allies have reportedly turned on each other in a power struggle that has led to a strain between Saudi Arabia and its main regional and military coalition partner, the United Arab Emirates.

The UAE has intervened on behalf of southern separatists battling the Saudi-backed government for control of the south, launching air strikes on government forces trying to regain their interim seat of power in Aden port.

The escalation could further fracture the Saudi-UAE alliance and embolden the Houthi rebel movement to the north, which the coalition is fighting. The United Nations and the U.S. are reportedly working to restart peace talks, reports say.

The two sides are said to have rival agendas.

They became allies through a coalition that ousted President Abd-Rabbu Mansour Hadi’s government in 2014, but Hadi, who resides in Riyadh, has asked Saudi Arabia to stop what he called UAE interference.

Hadi’s government has insisted that separatists cede control and that the UAE stop supporting southern fighters it has armed and trained. But the separatist Southern Transitional Council said it would not withdraw until the Islamist Islah party and northerners are removed from power in the south.

“Saudi Arabia finds itself in a quandary,” the International Crisis Group said in a recent brief. “Aggressive Saudi action to rein in the STC could trigger a civil war within a civil war in which Riyadh’s allies are far from sure to prevail.”

What it could mean for the coalition

The coalition was formed to neutralize the Houthis by Saudi Arabia, whom the country feared would be used by Iran to build influence along its border. The current crisis makes it difficult for Riyadh to weaken the Houthis, who have stepped up attacks on Saudi Arabia, twice hitting the world’s top oil exporter’s energy assets recently.

The UAE scaled down its presence in Yemen in June as Western criticism of the coalition mounted, leaving Saudi Arabia to bear the biggest burden of an unpopular war that has been devastating for countless thousands of Yemenis.

The UAE has switched its focus to U.N. efforts toward a political solution, Reuters reported. Saudi Arabia wants to remove the Houthi threat and secure its borders while the UAE’s concern is stamping out militants and securing Red Sea shipping lanes, analysts say.

As the world waits for a solution, Yemen’s many destabilizing forces continue to deepen the quagmire, as the alliance remains on shaky ground and outside parties continue to push for an end to the violence.