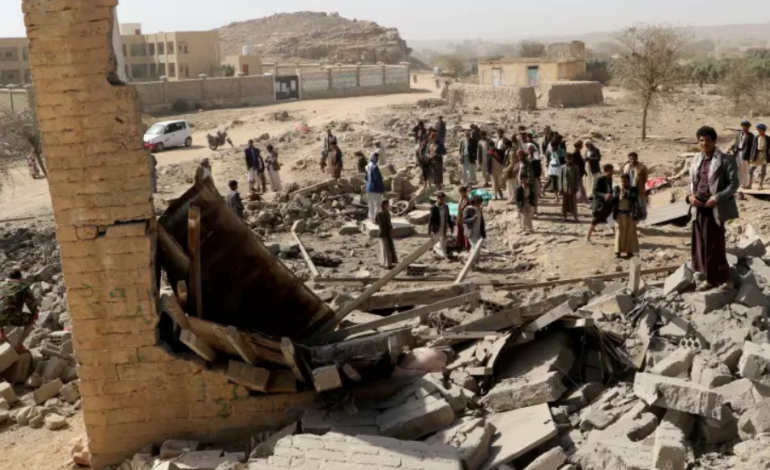 Yemeni citizens stand near a destroyed house in Saada in January 2018. Photo via Naif Rahma/Reuters

CAIRO — Saudi Arabia and its Western allies, including the United States, may be complicit in potential war crimes, the United Nations said in a report on Tuesday that called for more accountability from all sides in the war.

The report came from a team of investigators commissioned by the U.N. Human Rights Council and found that all parties to the conflict had perpetrated potential war crimes through airstrikes, shelling, snipers and land mines, in addition to torture, arbitrary killings and more.

It also strongly challenged the credibility of the Saudi-led coalition to self-investigate and hold itself accountable for attacks that result in the deaths of civilians, a justification often given by British officials and the Trump administration to justify ongoing military support and arms sales, the Washington Post reported.

The Saudi-led coalition is accused of intentionally starving Yemenis as a tactic of war and killing thousands of civilians in airstrikes, while the northern rebels known as Houthis are accused of planting land mines, shelling cities and deploying child soldiers, the Post reported. Iran was also accused of helping to perpetrate war crimes through its support for the Houthis in the report.

Human rights groups have long accused the U.S., Britain and other Western powers of abetting and prolonging the war and suffering in Yemen, which is currently staring down another famine.

The U.S. has an active role in the devastating conflict, providing logistical support and intelligence to the coalition in addition to selling billions of dollars in weaponry to the group, which is also led by the United Arab Emirates.

The report came two days after the coalition launched an airstrike on a rebel prison in Yemen, killing more than 100 people.

A fresh push was made by a group of Republican and Democratic lawmakers in the U.S. to stop U.S. logistical support for the coalition’s air campaign, as well as certain forms of intelligence sharing.

U.S. “in talks with Houthis” to possibly end Yemen war

Two days after the release of the report last Thursday, Al Jazeera reported that a top U.S. official said Washington was in talks with Houthi rebels to potentially end the war, the first such contact in four years.

“We are narrowly focused on trying to end the war in Yemen,” U.S. Assistant Secretary of State for Near Eastern Affairs David Schenker told reporters last Thursday during a visit to Saudi Arabia.

“We are also having talks to the extent possible with the Houthis to try and find a mutually accepted negotiated solution to the conflict,” he said, according to AFP.

Senior Houthi official Hamid Assem told AFP he could neither confirm nor deny the talks.

“That the United States says they are talking to us is a great victory for us and proves that we are right,” he said.

In June 2015, the Obama administration held brief talks with Houthi leaders to convince them to attend U.N.-sponsored peace talks in Geneva. But the conference and further negotiations failed to bring an end to the conflict.

In December 2018, U.N.-brokered talks in Stockholm resulted in an agreement that many thought could lead to a peaceful resolution, but little progress has been made since.