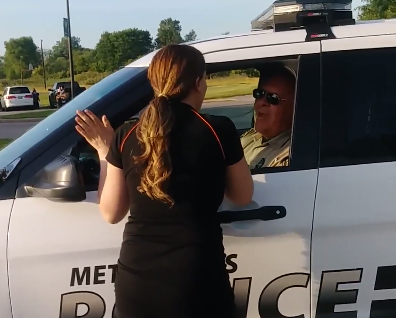 BROWNSTOWN TWP. —On August 9, a police officer returned to work following an investigation into alleged racist remarks at Lake Erie Metropark, where he had been patrolling.

The officer had been accused by a nearby park patron of telling an Arab American family to “go back to where you came from” after a heated exchange of words.

In a statement to police, the officer said he actually told the father of the family, Hadi Dagher, “If you can drive like that in Illinois, then go back there.”

Dagher’s car had an Illinois license plate, although it was not seen in a video of the incident posted on Facebook that prompted the investigation.

The police officer was found in violation of department policies for not being “courteous” or “exemplary” following the incident, but his comments were not deemed to be racist.

During his interview with police, Dagher said he believed the comment, which he did not hear, was directed at his Middle Eastern heritage. He added that he has no ill will toward the officer and did not want to put his family’s well being in jeopardy, but also that he wants to be treated with respect.

In response to the investigation’s results, spokespeople from two local civil rights organizations, the Council on American-Islamic Relations of Michigan (CAIR-MI) and the Arab American Civil Rights League (ACRL), shared their thoughts on the incident.

“CAIR Michigan does believe that the comments are still extremely racist despite what internal investigation shows,” CAIR-MI representative Asha Noor told The Arab American News. “These comments are rooted in racism and xenophobia and anti-Arab and anti-Muslim sentiment.

“We’re seeing at the highest levels of office, comments like ‘go back where you came from’, like Donald Trump’s towards freshman representative Ilhan Omar (D-MN), and it is a rallying cry that is reflective of a push toward xenophobia in this country,” she added.

“It correlates with a spike in hate crimes and violence against people who are perceived to be, in general, minorities.”

Noor said that CAIR urges the police department to conduct another internal investigation because the organization is not satisfied with the outcome of its review.

Rula Aoun, the director of the ACRL, said that the officer’s behavior on the video was a cause for extra concern. She noted that the video did not show him anywhere near Dagher’s car, which the officer had said was the basis for his remark.

“That being the case I think a person would naturally be led to believe that the comments were directed towards his race, religion or ethnicity,” she said. “I still believe them to be racist simply because of the context. The individual had the opportunity to respond and say ‘no, that’s not what I meant’ and did not do so.

“He had no remorse for the comments he made,” she added. “He simply was not apologetic in any fashion.”