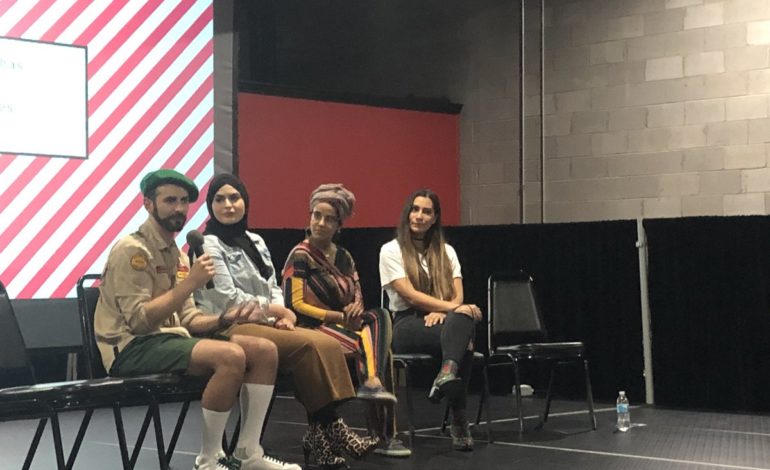 Ali Abbas, co-writer of the new Dearborn-based series “Not For Profit”, and co-writer and actor Iman Saleh sit with actors Zeina Issa and Zeina Nasseriddine for a Q&A at the Arab American National Museum, Saturday Sept. 7. - Photo by Sarah Kominek

Iman Saleh, co-creator, writer and actor in the series, told The Arab American News that the “mockumentary” follows the story of three Arab American, Muslim women working at a cultural non-profit organization, which is “largely run by White people.”

Saleh stars in the show as Sahara, with Zeina Issa as Shayma and Zeina Nasseriddine as Aliyah. She said these characters are each “flawed” in their own way.

“Nobody likes to watch a perfect character,” Saleh said. “We put in a lot of flaws that we deal with personally and that we see around us within the community.”

Instances of insensitivity in the show are examples of “appealing to an audience that thinks it’s very cultural to take belly dancing classes”, among other things Saleh said happens in the Dearborn community.

At the event on Saturday, Saleh said the show, “comically tackles issues and taboos within [the Dearborn] community not otherwise addressed … like colorism, discrimination and racism.”

“Topics such as being a woman of color, which many people in our community are, Islamophobia and queerness,” Ali Abbas, co-writer of “Not For Profit”, said at the release event Saturday. “We hope to see our work resonate with you and we also hope that you just find it funny.” Abbas said a lot of the traits of these characters are traditionally masculine.

“We wanted to demolish that idea of what a Muslim woman is supposed to be.”

Saleh said the series currently consists of six episodes in the season.

The show is still in its beginning stages of production and is expected to be released in 2020 on free video hosting sites like YouTube, Vimeo, Facebook and Instagram. Saleh said talks are in works with other streaming services.

“We’re planning on producing the whole season,” she said. “We might come out with it sooner, depending on how our scheduling looks.”

Saleh said she wants the series “to show the Muslim woman narrative in its varieties” through television media.

You can see a short “Not For Profit” trailer and get more information at www.notforprofitseries.com