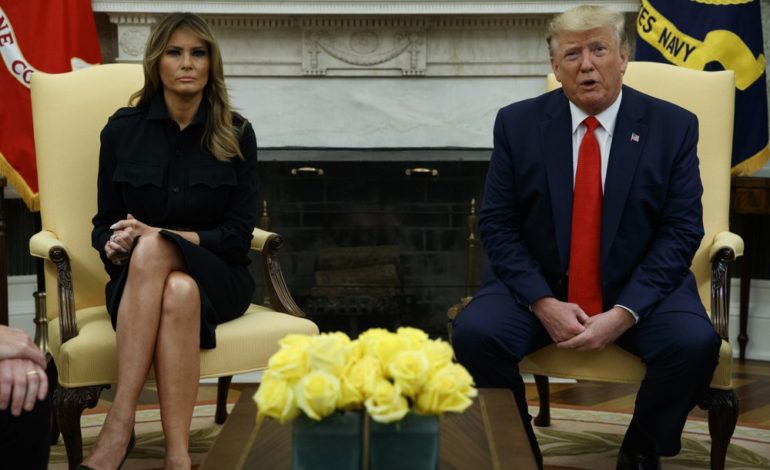 President Trump and First Lady Melania Trump at an appearance at the Oval Office to discuss plans to ban flavored e-cigarettes. Photo: AP

The announcement came as health authorities and government officials have shown alarm over an apparent rise in reports of underage vaping nationwide.

The FDA will develop and roll out guidelines to remove all e-cigarette flavors except tobacco from the market.

The flavor restrictions will be developed in the coming weeks. Azar said the policy could be implemented as soon as 30 days after it is finalized.

“I mean, she’s got a son – together – that is a beautiful, young man, and she feels very, very strongly about it,” he said.

This is the first public comment Trump has made about the issue since news broke that health officials were investigating hundred of cases of a mysterious breathing illness allegedly associated with the use of e-cigarettes.

However, as the Associated Press reports, no single ingredient, device or additive has been identified and many cases involved marijuana vaping.

Federal restrictions will only apply to nicotine vaping products.

Health officials also said Wednesday that one in four high school students have reported vaping this year. They have called the trend an “epidemic.”

Azar said flavored products could apply for FDA permission to reenter the market. But the agency’s standards only give clearance to products that represent a net benefit to public health.

The e-cigarette manufacturer Juul, which largely has been blamed for pushing its flavored products on underaged users by marketing certain flavors, has spent $1.9 million in the first half of the year to try and sway the White House, Congress and the FDA.