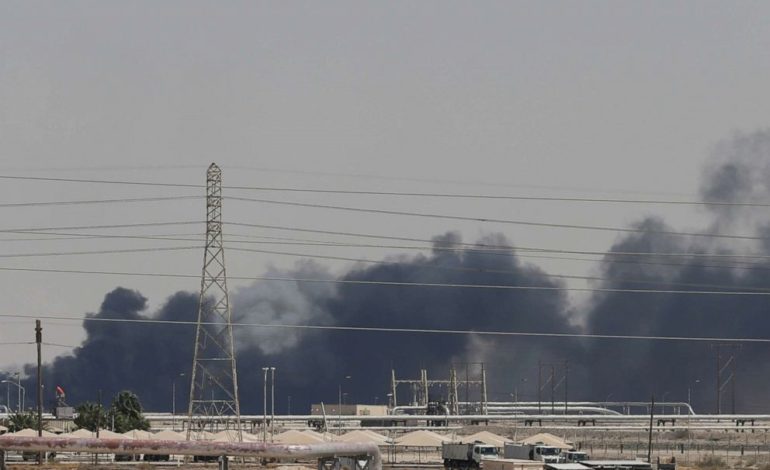 Smoke is seen at the Aramco oil facility in Abqaiq, Saudi Arabia on Saturday. Photo via ABC News

NEW YORK — Oil prices ended up nearly 15% higher on Monday after an attack on Saudi Arabian crude oil facilities cut the kingdom’s production in half, a report from Reuters said.

Concerns of retaliation also affected the oil prices, of which Brent crude futures settled at $69.02 a barrel, rising $8.80, or 14.6%, its largest one-day percentage gains since at least 1988.

“The attack on Saudi oil infrastructure came as a shock and a surprise to a market that had not been trading volatility and was more focused on the demand aspect over supply,” said Tony Headrick, an energy market analyst at St. Paul, Minnesota commodity brokerage CHS Hedging LLC.

“I think the tables abruptly shifted in the way of the supply outlook and that caught many that were short off guard and encouraged new length to be put in place,” Headrick said.

Emerging information on recent attacks on Saudi oil facilities “indicates responsibility lies with Iran” according to the U.S. Ambassador to the United Nations Kelly Craft, and that there is no evidence the attack came from Yemen. But the Houthi rebels in Yemen reportedly claimed responsibility for the assault, which hit one of the world’s largest oil processing facilities, according to a report from ABC News.

Britain’s U.N. Ambassador Karen Pierce told the council: “We’re still assessing what happened and who’s responsible for the attacks. Once this has been established, we will discuss with our partners how to proceed in a responsible manner.”

The statement came as Russia and China urged against hasty conclusions over the attacks.