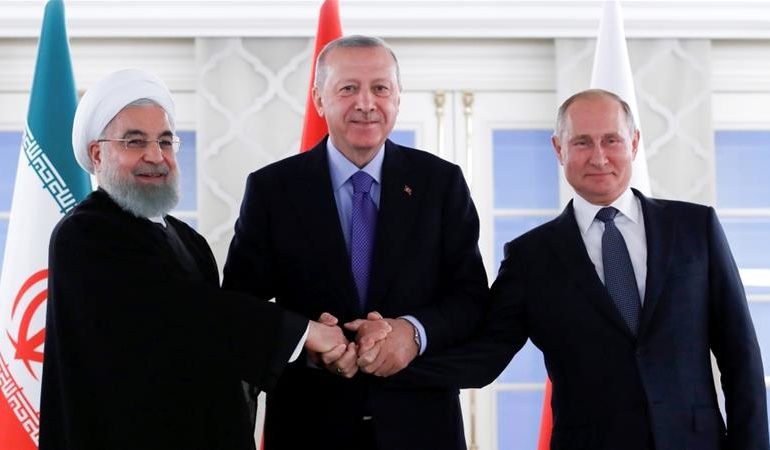 ANKARA — Russian president Vladimir Putin said he hopes that three-way talks held on Monday with Iranian and Turkish officials could help bring a “final” settlement to the Syrian crisis.

“I would like to express a confidence that our talks will be productive and the agreements reached will form a ground for final resolution of the crisis in Syria, restore peace and security in this country, strengthen its sovereignty,” Putin said according to Reuters.

Putin met with Turkish President Tayyip Erdogan and Iranian President Hassan Rouhani here, and said prior to the talks that the situation in Syria’s Idlib region remained a great concern, and that the three nations have to make additional steps to root out the “terrorist threat” in the area.

The crisis in Syria has continued since March 2011 and began with major unrest in Damascus and Aleppo.

According to Erdogan, Ankara plans to resettle one million Syrian refugees in northeast Syria, with Turkey and the United States cooperating to form a so-called “safe zone,” Al Jazeera reported.

Moscow meanwhile is hoping to see progress on establishing a constitutional committee to oversee the next stage of the political settlement in Syria.

Russia has long backed embattled Syrian president Bashar al-Assad, while the United States and its allies in the region have backed the resistance which includes Syrians against Assad as well as rebel fighters from various other countries.

Putin would score a political win in addition to Russia’s military victories in the region, said Dareen Khalifa, senior Syria analyst at International Crisis Group, who added that expectations should remain low.

Even if it is agreed as to who will form the committee, “this leaves a crux of issues unaddressed for the future of the political process including the regime’s ability and willingness to undertake any kind of political reform,” Khalifa told AFP news agency.