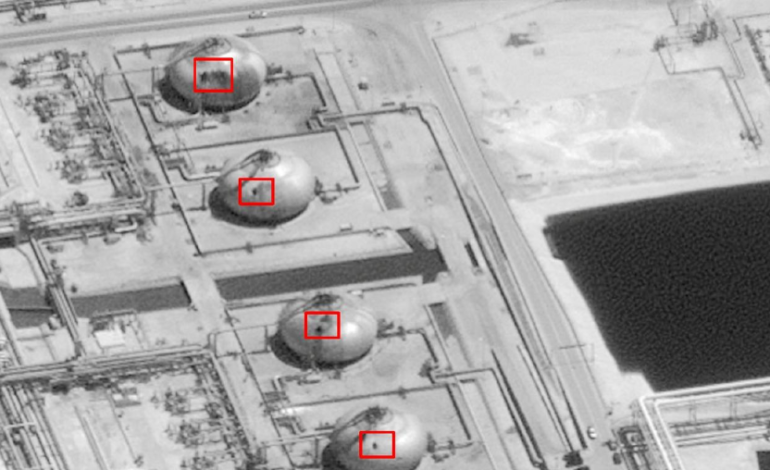 Damage to Saudi Arabia oil infrastructure is shown in this government handout photo from Reuters.

Speaking on condition of anonymity, three officials said to Reuters the attack involved both cruise missiles and drones, indicating it may have been more sophisticated than previously thought.

The officials did not provide evidence or explain what U.S. intelligence they were using for the evaluations, however. If shared publicly, such an information leak could add further pressure to Washington, Riyadh and others to respond, perhaps militarily, the Reuters article said.

Iran has denied its involvement in the strikes while its allies in Yemen’s civil war, the Houthi rebels, claimed responsibility for the attacks. They say that the plants were struck with drones, some of which were powered by jet engines according to the Reuters report.

On Monday, U.S. President Donald Trump said it looked as if Iran was behind the attacks, while Russia and China urged against any hasty conclusions.

French Foreign Minister Jean-Yves Le Drian said he was unsure if anyone had any evidence to say whether drones “came from one place or another,” however.

The incident has sent oil prices soaring while the world’s largest exporter of oil is reeling. On Saturday, oil output was halved, but Saudi Arabia said that full production would be restored by month’s end.

Iran’s Supreme Leader Ayatollah Ali Khamenei on Tuesday ruled out talks with the United States unless the Trump administration returns to the nuclear accord between Iran and the West that the U.S. abandoned last year.

Saudi Arabia has asked international experts to join its investigation.

President Trump has said that the United States is seeking to avoid military confrontation since the incident, but also boasted that the U.S. boasts the world’s best military forces and used the terminology “locked and loaded” depending on verification of the “culprit” to describe a possible future response.