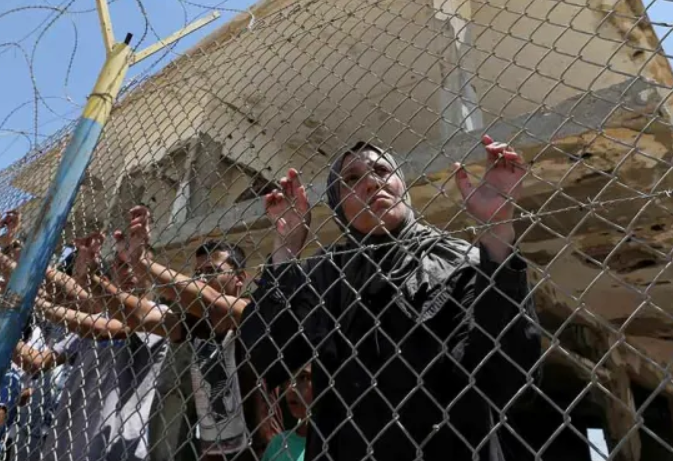 Protesters demonstrate for the opening to a border crossing in occupied Gaza. Photo via Reuters / Ibraheem Abu Mustafa

WASHINGTON — On the heels of the Israeli prime minister election and with the U.S. administration preparing to release the political component of its purported peace plan for Israel and Palestine, 22 Christian leaders, including the Churches for Middle East Peace Executive Director Rev. Dr. Mae Elise Cannon, wrote a letter to President Donald Trump urging a shift in policy.

In the letter, the leaders state that “a truly viable peace can only be achieved by lifting the Gaza blockade, by ending the Israeli occupation of territories captured in 1967, through the realization of Palestinian self-determination, the recognition of Jerusalem as a shared capital for Israelis and Palestinians and the recognition and fulfillment of the rights of Palestinian refugees,” the letter said.

“Such a peace can only be reached in consultation with leaders representing both the Israeli and Palestinian peoples.”

The letter came following Prime Minister Benjamin Chaitanya’s campaign promise to officially annex Area C as well as all Israeli settlements in the West Bank. Building settlements in Palestine has continually been condemned as internationally illegal according to several different human rights groups, including the United Nations’ Security Council.

Such a move by Netanyahu would irrevocably damage prospects for a peaceful resolution to the conflict, CMEP said.

“Churches for Middle East Peace strongly condemns annexation of any Palestinian land,” a press release from the organization read.

“Annexation of even part of the West Bank would be a disaster for both Israelis and Palestinians.  Palestinians would be left without any possibility of a viable state of their own, and neither people would be any safer or secure. We are deeply concerned by the United States Government’s apparent support for these actions. We call on all Americans, especially America’s Christians, to oppose this threat to peace in the Middle East and the continuity of the Christian presence there.”