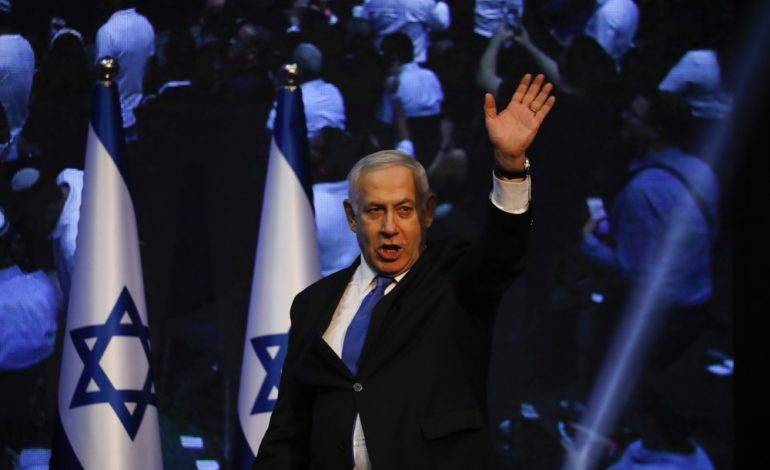 Gantz declared victory on Thursday after his Kahol Lavan edged over Likud in Israel’s Tuesday’s election.

Gantz ignored Netanyahu’s request for coalition talks and has said he is ready lead such a national unity government himself.

“Blue and White is the largest party,” Gantz said. “We won 33 seats and Netanyahu did not succeed in winning the 61 seats for his bloc that he sought.

“I will build a broad and liberal government that will deliver the will of the people. We will not surrender to any dictate. The negotiations will be directed by me responsibly and with good judgment.”

With 98 percent of the votes counted in the election, Kahol Lavan has won 33 out of 120 Knesset seats, with Likud following with 31 seats.

This mean Netanyahu’s bloc, comprised of right-wing and ultra-Orthodox parties, currently stands at 55 seats. The center-left bloc has 57 seats.

Both Netanyahu’s right-wing bloc in the Knesset and the centrist and left-wing bloc led by the Blue and White party fell short of the 61 seats needed to form a government in the 120-seat Parliament.

The third largest party in the Knesset is the Joint List of Arab parties, which secured 13 seats in 2015. The ultra-Orthodox party Shas follows the Joint List in number four with nine seats.

Avigdor Lieberman, the so-called kingmaker, whose Yisrael Beiteinu party now has the swing vote with eight seats, has reiterated his support for a “broad liberal unity government”, which would include Yisrael Beiteinu, Likud and Kahol Lavan.

Lieberman refused to join a Netanyahu coalition government after April’s election, which forced a second election.

Lieberman has seen Netanyahu’s proposition to Gantz as a slight and reacted to it by calling Netanyahu an opportunist that is “prepare public opinion for a third round of elections.”

It is not clear whether Lieberman will support Netanyahu or be squeezed out of the equation all together.

Netanyahu has made it clear that he is not seeking a third election.

Netanyahu also faces corruption charges, something he must reckon with as tides change in Israeli politics.

If Netanyahu remains prime minister on a rotating basis, like the one between Shimon Peres and his Likud rival Yitzhak Shamir between 1994 and 1998, Israeli law says he does not have to step down even when formally charged.

Netanyahu is expected to appear in court for a pre-trial hearing in October, during which he can argue against indictment.

Israel President Reuven Rivlin will begin talks with the parties elected to the Knesset on Sunday to see who they might recommend to form the next government.