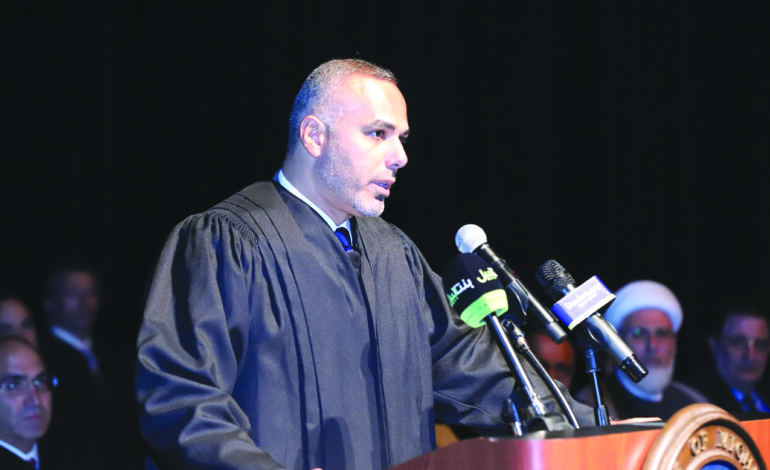 Farhat, one of 10 siblings, was appointed to the Third Circuit Court Bench in March by Governor Whitmer.

DEARBORN — There’s a saying in Metro Detroit’s Arab American community that perhaps more doctors and lawyers are produced here than anywhere else.

And for a long time Helal Farhat, a Wayne State University graduate, wanted to be a doctor. But just a few short years into his college career, Farhat said he knew that wasn’t the right path for him and he began gravitating toward law school instead.

On Wednesday, September 18, the 42-year-old longtime attorney found himself in a familiar place, surrounded by family and friends, for his investiture ceremony before a packed Ford Community and Performing Arts Center.

Farhat, a practicing attorney for 17 years, was appointed to the Wayne County Third Circuit Bench on March 28 by Governor Whitmer and will succeed former Judge Vonda Evans for a term expiring at noon on January 1, 2021.

After Farhat took his oath of office and received his robe from Michigan Supreme Court Chief Justice Bridget M. McCormack, the crowd erupted in thunderous applause — showing support for one of the Michigan legal scene’s fastest risers and punctuating an evening spent celebrating one of the community’s newest shining stars.

For Farhat, a tireless worker on behalf of justice, it wasn’t just a chance to catch his breath and revel in the feeling of true success.

It was also a chance to thank the countless supporters, mentors, friends, family members and everyone else who helped him along the way.

Taking the podium during Wednesday’s ceremony, Farhat took the opportunity to thank those who supported him over the years.

“It’s so great to be here with so much of my community members, so many friends, family, colleagues past and present,” he said. “I’m really blessed. Thank you all.”

Among those also speaking were Farhat takes the oath of office from Bridget M. McCormack, the chief justice of the Michigan Supreme Court.

“Something about my dad is that he has integrity and honesty,” Layal Farhat said.

“Everyone in this room should be able to trust his word and know he will always do the right thing no matter who it is towards.

“I cannot be more proud of my Baba for achieving this goal. He deserves the world after all he’s done for his family and his community around him.

“I’m glad and proud to say that I’m the daughter of Helal Farhat because of who my dad is…Although he can look intimidating and scary at first that is not at all who my dad is…He is the most loving, fun, kind and caring human being you will ever meet.”

For Farhat, his family— which includes his wife, Sahar, whom he married in 2003 after becoming “best friends” at Fordson High School, and his three daughters Layal, 14, Sarina, 12 and Noor, 11— has become his biggest motivation and a new generation of what has become an immigrant success story for the ages.

Farhat’s career path took him from Fordson High School, where he graduated in 1995, to Wayne State, where he received his undergraduate degree in 1999 and his juris doctor degree in 2002.

While at Wayne State, an incident involving a Dearborn police officer who treated Helal and friends in “an objectionable way” that led to his dismissal fueled his mid-college career change and made him interested in the justice field.

After graduation, he took a summer clerk position at the law firm of Braun, Kendrick and Finkbeiner in Saginaw before finishing law school and practicing law at Salamey and Associates in Dearborn, home to future 19th District Court Judge Sam Salamey.

Farhat began to get involved in the community, sitting on boards and doing pro bono work for religious, charitable and social organizations.

In 2009, he was appointed a magistrate judge in the 19th District Court, where he served until 2012 before being appointed again in 2017 until this past March.

Growing up in a family of 10 (five boys and five girls), life was far from easy for Judge Farhat and for the Farhat family in general.

He grew up in a small town named Baraachit in southern Lebanon, where work was scarce and most families lived off the land under the weight of foreign military threats and occupation.

“I can’t imagine how my dad (Abdallah), who doesn’t speak English, is feeling right now,” Farhat quipped during his speech at the investiture, saying that he recently sat down and audio-recorded stories with him about his “gruesome, hard life.

“How he never had the opportunity to go to school, how he left home when he was 16 to try to find a better life abroad, how he walked for days at the age of 16 from South Lebanon to Haifa to try to find work, no one knowing if he’s dead or alive,” Farhat said.

The family immigrated to America in 1988 when Helal was just 10-years-old, but his father’s international quest for a better life was just beginning.

“He spent years in the Persian Gulf (Kuwait) away from the 10 of us trying to provide for the 10 of us,” Farhat said, calling his dad “90-years-young and still optimistic about the future.”

Sitting among an honor roll of local judges, family, friends, well wishers and community leaders, the Farhats were clearly in good company on Wednesday night.

But there was one person missing on the evening whose presence could never be replaced: Iftikhar Farhat, Helal’s mother, who passed away from cancer in 2012.

“Then there was my mother whose death I never really learned to cope with, and that is my veiled secret,” Farhat said.

Farhat said his mother instilled him with values like respect and tolerance, as well as a belief that no matter how cruel life is “the essence of our being is to be decent.”

For Farhat, the future is bright

One of Farhat’s top mentors, Judge Salamey, seemed to know from the start that Farhat was going to be yet another Arab American community success story.

He hired him based on his first impression and on knowing the character of his family.

“I would be remiss if I didn’t thank our governor for making this appointment and for placing the best man in the right place,” Salamey said during his speech.

Dabaja also was among those who’ve worked closely with Farhat.

“Tonight after nearly 15 years of working together I get to honor someone who I’ve considered my friend, my confidant, my colleague, my listener, and truly my brother, the honorable Judge Helal Farhat,” Dabaja said.

“There’s nothing about him that rings untrue to me,” Wayne County Executive Warren Evans said at the investiture.

“This is a straight shooter, this is a guy who has compassion for people, this guy has a desire to support his community and any community.”