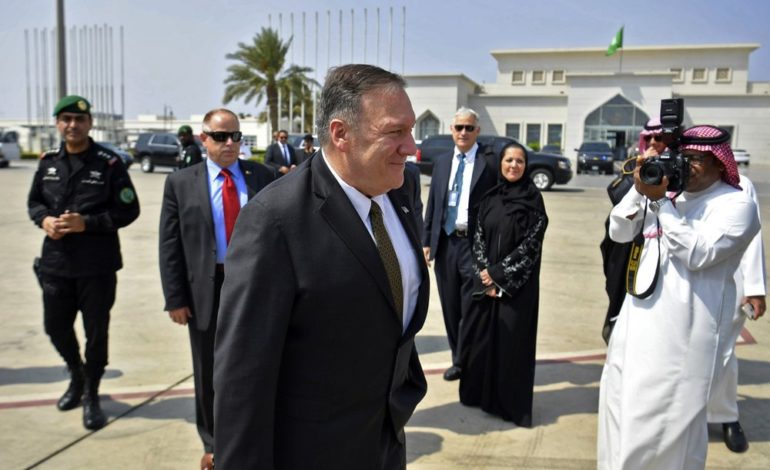 TEHRAN/RIYADH — Any U.S. or Saudi military strike against Iran would bring “all-out war”, Tehran said on Thursday, keeping up a drumbeat of warnings to its adversaries after they accused the Islamic Republic of a strike on Saudi oil facilities.

The United States has been discussing with Saudi Arabia and other Gulf allies’ possible responses to Saturday’s attack, which they blame on Iran and which U.S. Secretary of State Mike Pompeo described earlier as an act of war on the kingdom.

Pompeo appeared to soften his tone on Thursday after talks with Abu Dhabi’s crown prince, the de facto ruler of the United Arab Emirates, which is Riyadh’s main Arab ally.

“We are here to build out a coalition aimed at achieving peace and a peaceful resolution,” Pompeo told reporters. “That’s my mission, that’s what President Trump certainly wants me to work to achieve and I hope that the Islamic Republic of Iran sees it that way.”

“I am making a very serious statement that we don’t want war; we don’t want to engage in a military confrontation … But we won’t blink to defend our territory,” Iranian Foreign Minister Mohammed Javad Zarif told CNN in an interview.

Asked what the consequence of an American or a Saudi military strike on Iran would be, Zarif said “an all-out war.”

Zarif earlier warned on Twitter that what he described as the B team — including Israeli Prime Minister Benjamin Netanyahu and Saudi Crown Prince Mohammed Bin Salman — was deceiving President Trump into a war against Iran.

Iran has denied any involvement in the attacks, which was claimed by Yemen’s Iran-aligned Houthi group.

“They (U.S. and Saudi Arabia) have realized that playing with the tail of a lion is highly dangerous and that if they take action against Iran at any time, they know there will be no tomorrow for them in the region,” Fars quoted Hossein Dehghan as saying.

Iran’s regional rival Saudi Arabia is leading a Sunni Arab coalition fighting the Houthis in the impoverished state on the tip of the Arabian peninsula — part of a regional proxy war between Tehran and Riyadh across the Middle East.

Iran has denied any involvement in the attacks, which was claimed by Yemen’s Iran-aligned Houthi group.

Trump struck a cautious note on Wednesday. He said there were many options short of war with Iran, which denies involvement in the Sept. 14 strikes that initially halved Saudi oil output. He ordered more sanctions on Tehran.

Zarif also said in a tweet on Thursday that Pompeo was trying to delay issuing visas for the Iranian delegation to the upcoming United Nations General Assembly.

Trump said he is not looking to meet Iranian President Hassan Rouhani during a U.N. event in New York later this month, where Pompeo said the Aramco attacks would be a major focus and suggested Riyadh could make its case there.