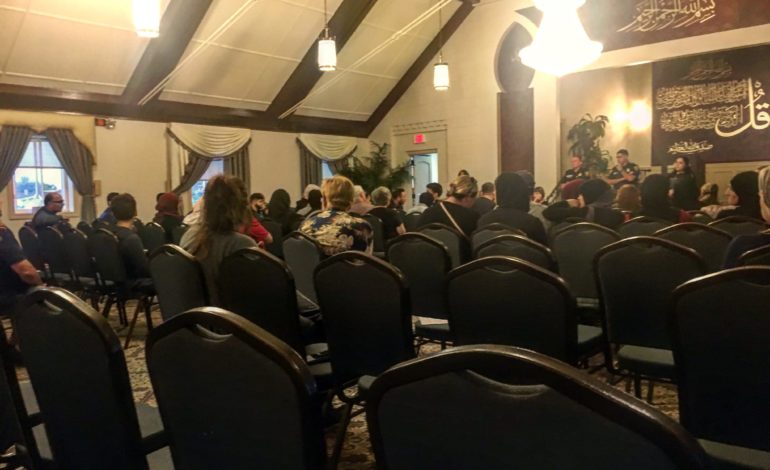 DEARBORN —  After recent armed robberies and deaths, crime and safety enforcement were two main topics at a neighborhood association meeting this past Wednesday evening at the Hajj Jamil Community Center. They’re also issues that impact almost every neighborhood in Dearborn.

Held by the Aviation Property Owners Association (APOA), president Jacklin Zaidan and Dearborn Police and city officials explained how the city is working to address those issues. The goal of the association is to promote and procure the enforcement of and to ensure the proper maintenance of necessary public improvements within subdivisions or contiguous properties.

Three teenagers were taken into custody in connection with the September 6 fatal shooting of 29-year-old Iraqi American Saja Al-janabi, arraigned on multiple felony charges, including homicide and armed robbery.

Even so, residents have expressed growing concern about the recent armed robberies and carjackings in the city.

Students from the Arab Student Union (ASU) at Fordson High School stressed their concern on youth deviance and recent crimes.

“The crimes committed were by youth (on September 6), and while these perpetrators were not residents, it still affected a lot of Dearborn youth,” said ASU President Zeinab Alhashemi.

She centered her concern on how the city of Dearborn and Dearborn Police could prevent youth from being on the streets and committing such acts and, instead, become more active and civically engaged to the community in a healthy and positive manner.

Jenna Kobeissi, ASU’s director of political action at Fordson, added that it’s important to establish a positive relationship with neighbors and be a family. She explained that this is what the community needs.

“Even if it takes us a while to establish a neighborhood watch, you can be your own neighborhood watch,” she said. “Make friends with your neighbors, and if something is wrong, you know that neighbor is going to call and alert you (and vice versa).”

Zeidan elaborated on the effort of parents getting involved in schools and parent-teacher associations.

Do some of Dearborn’s streets lack adequate lighting?

During the meeting, some community members claimed there’s a correlation between poorly lit streets and crime, while others spoke about the ordinance against street lighting in order not to disturb residents and policies about driving at night.

There are two approaches to addressing the issues according to the Dearborn City Council: If a block lacks adequate street lighting, the City Council would need to conduct a study of that block. If the study determines the street lights are too dim, the Council would then file a report with DTE Energy requesting the company fix the problem; this process would involve construction to accommodate additional electrical wires.

The other approach would include the replacement of malfunctioning bulbs.

A resident with concerns about street lights would need to contact both the City Council and the Department of Public Works. After that, the Council would investigate.

According to the Dearborn Police Department’s fiscal report, the number of robberies in Dearborn increased from 55 in 2018 to 79 in 2019. However, crime has been decreasing at a steady rate from the 1980s, during which there were more than 200 robberies, until now.

Attendees were encouraged by the Dearborn Police to always be aware of their surroundings and to pay attention. It was highly recommended that residents leave their porch lights on, equip an alarm, set up surveillance cameras, trim bushes, lock all doors and to call the police if they spot anything suspicious.

Residents thanked Dearborn Police for their presence on neighborhood blocks, yet suggested more marked police cars should patrol the areas alongside unmarked ones.

The APOA proposed providing the neighborhood’s concerns to the City Council to further address any needed safety enforcement. To receive the latest updates and information on APOA and the neighborhood, subscribe to the Remind app by texting @jzeida to 81010.