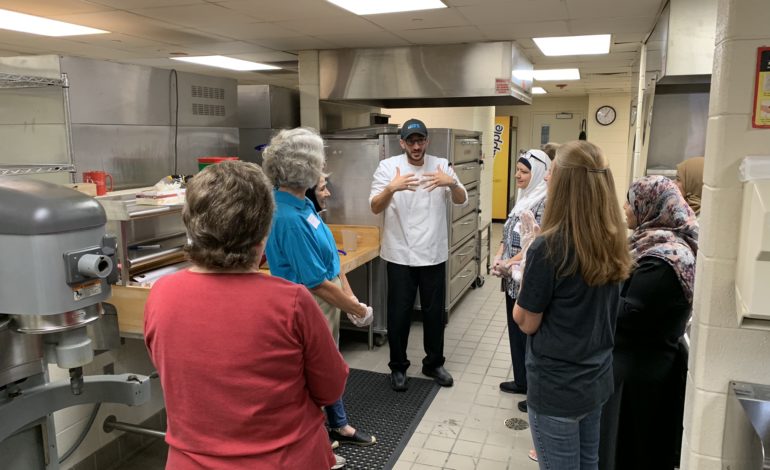 DEARBORN – Its been little over three years since Dearborn School Superintendent Glenn Maleyko was approached by his student advisory council about the availability of healthier, more halal and ethnic choices on the school lunch menu.

“When it came to school lunches, I heard from some of our customers, which are students, and I heard from parents, who wanted healthier options,” Maleyko told The Arab American News over the phone last week.

This school year, Dearborn Public Schools (DPS) boasts a wider, healthier and more halal and ethnic lunch menu, thanks to a concerted effort by the district to look towards revamping the its food system.

At a National School Board Conference with then-DPS Board President Mariam Bazzi, Maleyko noted that though his district had great, unionized food preparation and distribution staff, it lacked the physical capacity to expand its food offerings to students.

“We started looking at these companies that are on a national level where they can provide healthier choices, less food waste and more halal options,” he said. “Its been a three year process. Last year we bid out to service. We still have our own employees, but we bid to attract companies. The winning bid was SFE (Southwest Foodservice Excellence), which is based out of Arizona.” Maleyko sought help from members of the school district that were versed in the Dearborn community’s food traditions to create the proposal and demand certain food items be available to students.

“We just started a few weeks ago,” Maleyko said. “The management is the real change. What they’re doing is they have a chef and an expert on nutrition. They are training our staff. It’s the infrastructure that we didn’t have.”

“I’m hearing (positive feedback) from parents and staff. Putting students first is the reason were doing this. We’ve only just started the program; it’s only going to get better from here.” – Superintendent Glenn Maleyko

The changes required the district to implement a major structural and district-wide overhaul of its food operation.

Thanks to a federal program, DPS has also recently secured the ability to have district-wide free lunches for its students.

For its part, SFE boasts a culinary approach in contrast with traditional school cafeterias, where meals are traditionally  pre-packaged and highly processed.

“Every new partnership between SFE and a district involves sweeping menu changes, as the foodservice program transitions to a more fresh-from-scratch approach and to custom menus created for the specific student population in the district,” an SFE spokesperson said.

“As a result of this early work, SFE has prepared to offer a wide variety of new menu items, as well as handmade sandwiches and a full, fresh salad bar,” the spokesperson added.  “SFE’s menus will constantly be refined through student feedback during regularly scheduled taste testing panels at each school campus.” In addition to fresh-from-scratch food and expansive menu options, SFE is bringing culinary and nutrition education programs to district students. These include farmers markets and even interactive “Roving Chef” events, which allow students to learn to cook from scratch, right alongside a real SFE chef.

“I can’t wait to spend hands-on time with students,” Dearborn Chef Danny Saghir said. “The whole reason I joined the SFE Dearborn team was to give back to this community.  I look forward to introducing students to the culinary arts.”

Although the program is in its infancy, the feedback to the new expanded menu has been resoundingly positive.

Najwa Youssef, a DPS Arabic teacher who also organizes an Arab American Cultural Club, said her students were excited about the new menu.

“I have talked to my students about their new lunch program,” she said. “They were excited and glad it’s all halal.

“They have more varieties of ethnic food from different regions, more than ever before. They also mentioned the increased portions and having fresh salads that take up half their plates. They also feel it’s a lot healthier.” “We appreciate the great work from our staff,” Maleyko said. “(The change) has been hardest on them. Schools principals are loving that the fact that kids are staying in to eat lunch and enjoying it.

“I’m also hearing (positive feedback) from parents and staff. Putting students first is the reason we’re doing this. We’ve only just started the program; it’s only going to get better from here.”

“I’ve never seen an SFE program be so well received, so quickly,” he said. “I can’t talk about the food without mentioning our phenomenal front-line staff.

“I’m so proud of the work the Dearborn foodservice workers have been doing. They’ve all been going above and beyond to provide the best possible service to Dearborn students.”