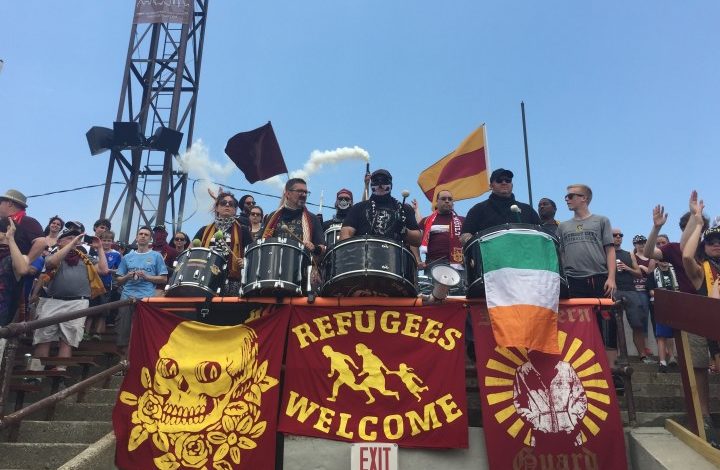 Soccer fans display a sign during a game at Hamtramck's Keyworth Stadium. Construction is underway in a resettlement program that aims to provide transitional housing to refugees.

HAMTRAMCK – The city of Hamtramck is expected to see three new two-family homes as part of a refugee resettlement project.

The project, dubbed Freedom Village, will provide refugees affordable transitional housing. Construction is underway and is expected to be complete by the summer of 2020.

Wayne County will utilize funds from Wayne County HOME Investment Partnerships Program (HOME), a federal grant program through the U.S. Department of Housing and Development (HUD), to support and encourage resettlement and eventual homeownership within the county.

According to an executive summary issued by the executive’s office, the settlement program falls within the larger Welcoming Wayne initiative. Residents of the Freedom Village will have an opportunity to temporarily occupy the new homes while the program will leverage resources from its partners in the area to provide job training, school readiness and homeowner assistance.

Hamtramck is also home to Wayne County Healthy Communities, a federally qualified health center, a resource to which refugees will have access.

“Freedom Village seeks to provide a better life to low-income refugees and immigrants by surrounding them with the resources they need to eventually pursue permanent homeownership opportunities,” Wayne County Executive Warren C. Evans said in a statement this week.

“We are a welcoming county that derives its strength from the diversity of its residents, and this project epitomizes that core value,” he added.

The project appears to be a unique intradepartmental and agency partnership that will use community service agencies and non-profits to navigate both the development and construction component and the social service aspect of the project.

Originally, six properties were tagged as sites for the project. Wayne County ended up settling on four lots on Faber street, in the mostly Yemeni south end of town.

As such, the new construction is taking place on parcels previously owned by the Wayne County Land Bank. The Wayne County Metropolitan Community Action Agency (WMCAA) will serve as the property developer and owner.

The Christian non-profit Samaritas will be the refugee placement and service provider. Street view of the vacant lots on Faber street in Hamtramck. The lots were sold to Wayne Metropolitan Community Action Agency for $1.00 each.

A Memorandum of Understanding was executed between Hamtramck, Wayne County, WMCAA, Samaritas and the Wayne County Land Bank Corporation in fall 2017 that outlines each organization’s responsibilities under this arrangement.

Hamtramck was chosen because of its portfolio of publicly owned vacant lots. Originally, six properties were tagged as sites for the project. Wayne County ended up settling on four lots on Faber street, in the mostly Yemeni south end of town, which were all sold to WMCAA at $1.00 each.

The county agreed to loan WMCAA $1.2 million at 0 percent interest through the HOME program to begin construction of the six units. The repayment period is 20 years.

The new construction will be at no cost to Hamtramck and is projected to increase the taxable value of the vacant lots and pull them back into the tax roll for the city.

Trump administration officials told the Associated Press last week that the administration had been planning to discuss a decrease in the number of refugees accepted into the country.

The number of refugees allowed to enter the U.S. has decreased dramatically in the wake of stringent security protocols for those arriving from countries deemed by the Trump administration as posing a national security threat.