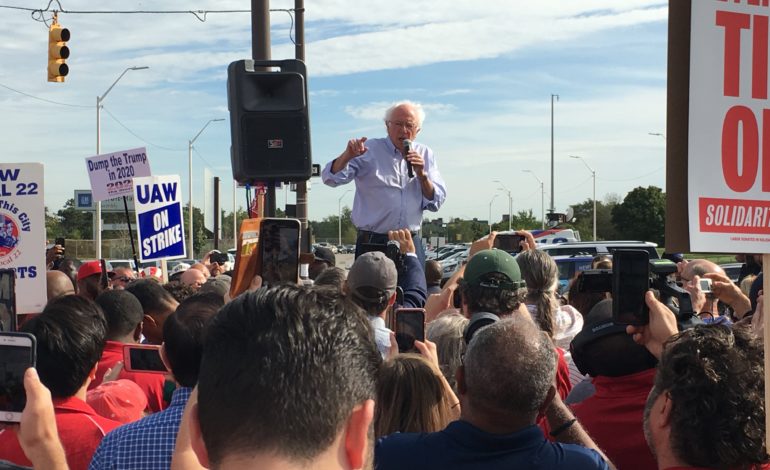 The labor strike is now in its 10th day. UAW members and supporters can be routinely seen picketing outside of the 4 million-square-foot plant’s multiple entrances. The plant, which straddles both Detroit and Hamtramck, has an uncertain future as GM announced in November that it will be “unallocating” it and four other plants in the U.S. and Canada.

The crowd, which included the striking workers, reporters, local organizations and Sanders supporters, gathered around 10:30 am at the I-94 and Grand Boulevard entrance to the plant as they awaited the senator’s cavalcade.

Pulling up in a black SUV to cheers and applause, Sanders immediately joined the picket line that circled near the entrance.

He then took to the podium to deliver comments in solidarity with the striking GM workers.

“All across this country, working people are sick and tired of working two or three jobs (and seeing) their health care benefits go down and their wages go down (while) seeing the CEOs get huge compensation packages,” he said. “They are tired of working at these factories for decades and waking up one day to see that factory move to Mexico where people are paid $4.00 an hour.”

He said the American working class demanded justice and are not looking sympathetically to GM. He urged supporters to view the company’s actions as unfair in light of government bailouts to get it through bankruptcy and its ensuing record profits.

“We want companies in this country to be decent corporate citizens, to treat their workers with respect and dignity.” – Bernie Sanders

He criticized other GM actions such as cutting health care benefits for its workers. Sanders has arguably been at the forefront of leading the discussion on single-payer, universal health care in the country.

“They think they’re going to force you into submission,” he said, with the crowd immediately replying “no way.”

He demanded GM invest in its workers by paying them a decent wage and to stop cutting their benefits and pensions and outsourcing jobs.

“General Motors thinks that after they treat their workers like crap they’re gonna go to Washington to get huge federal contracts,” he added. “We want companies in this country to be decent corporate citizens, to treat their workers with respect and dignity.”

He told UAW members that workers all over the country were looking to them for inspiration and that they should be proud of themselves for standing up for justice.

The plant has had a contested and fraught history and an equally uncertain future. However, credible rumors hint at the plant becoming a bargaining chip for the union as GM may look to produce electric trucks there.

U.S. Rep. Rashida Tlaib (D-Detroit) has called on GM to remember its obligation to the people of her district, as the plant originally opened when the government cleared up 1,000 homes in the neighborhood to make way for the facility.

She recently said at a Detroit Free Press editorial board meeting that GM needed to keep the plant open or give the property back to the public.