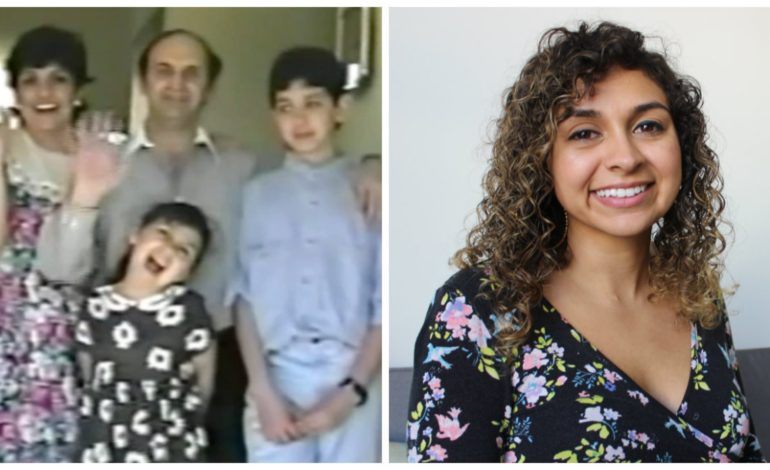 Colette Ghunim, right, and her family on the left. Photo via Mauricio Pena/Block Club Chicago

CHICAGO — Documentary filmmaker Colette Ghunim recently met her Kickstarter goal to complete her 56-minute documentary film “Traces of Home”, which will tell the immigrant story from the perspectives of her mother and father and their quests to find their childhood homes in Palestine and Mexico, respectively.

The Chicagoland area where Ghunim’s family currently lives is a melting pot of millions of people from countless ethnicities, cultural backgrounds, religions, native countries and more, and the Mexican and Palestinian influences are particularly strong.

The pair met, bonded over their shared love of the Spanish language and became smitten with each other on her dad’s first day at a welcome party in the city. They’re still together more than 40 years later.

It sounds like a love story made for Hollywood, but as is the case with most such stories, getting to that point was far from easy for the couple, who were each forced to leave their native lands as refugees in search of a better life.

Ghunim said she believes the documentary is especially important during a time when the dominant narrative regarding immigrants has not been in their favor, to say the least. She said she hopes to bring the special to the PBS network some time in 2020 to educate people on the immigrant story.

“It’s super important for us to be telling our own stories, because for too long other people have been telling our narrative, and it’s not the truth,” Ghunim said. “This is why we’re in the situation we are right now… Putting our story out there is super important. I would be super grateful to anyone be willing to provide funding for the film.”

After reaching her Kickstarter goal, Ghunim is ready to begin the next part of her quest.

“Reaching our goal of raising $35,000 in one month was a testament to the power of community; without the backing of both the Arab and Latino communities nationwide, we would not be able to complete this film in time for the November 2020 election. We are now in the process of figuring out how we can find out where my mother’s childhood home is located before we go to Mexico City in January 2020, as well as the death records of my grandfather, who they escaped from when my mother was 8 years old.”

Already, Ghunim has accompanied her father on a trip to find his childhood home in Palestine. While she doesn’t want to spoil the ending, the experience was eye-opening, to say the least.

“My father had never returned since the Nabka (also known as the “Catastrophe”, during which thousands of Palestinians were expelled from their homes by Israeli settlers) in 1948,” she said. “We were blown away because even though his whole village was removed, complete strangers, Palestinians took him in…12 people came with us to help him see his home and it was absolutely beautiful.”

The startling impact of the occupation was on full display in occupied Palestine, a setting that is expected to be a major backdrop for the film at a time when the outside world is still mostly unaware of the plight of the country’s residents.

“We were in the West Bank…You can’t understand the occupation unless you see it for yourself,” Ghunim said. “It’s really devastating; we tried to cover what’s been happening since 1948 and it’s still happening now with the ongoing demolition of people’s homes.”

For the next phase of filming, Ghunim is planning to bring her mother on a quest to find her own childhood home in Mexico.

“Our goal is to help people understand our upbringing, why we are the way we are and our past trauma as well,” Ghunim said.

“We came here as refugees, the same way millions of people ended up here as well…I feel that through ‘Traces of Home’ we will show an intimate story that will help create an emotional connection with the audience.”

For more information on the film, watch the trailer below.