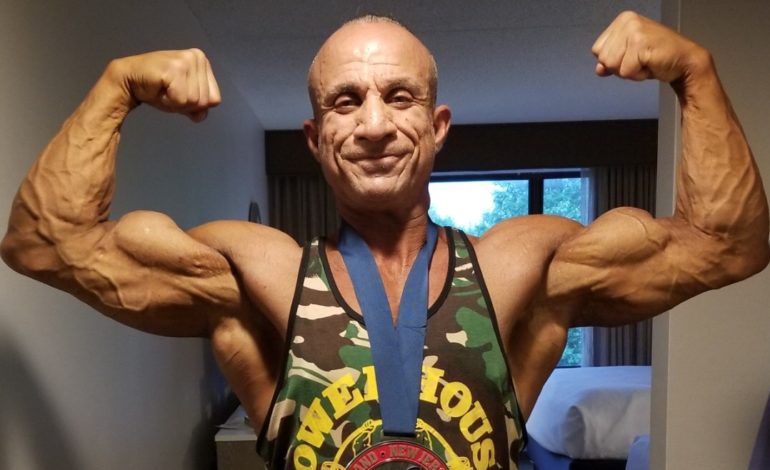 DEARBORN – At age 50, Dearborn bodybuilder Ibrahim Klait continued his extraordinary performance streak by coming in second this year in the Mr. Universe competition in New Jersey on July 4.

The event featured 1,700 bodybuilders. Klait competed in the 35, 40 and 50-year-old categories and two different weight classes.

Klait also competed in early September in Pittsburgh at the North American Championship, taking fourth place in a competition that showcased 2,200 bodybuilders from 23 countries from North, Central and South America and the Caribbean.

He spoke to The Arab American News this week about his successful career, staying fit and competing at such an intense athletic level at his age.

“I have done more than 40 shows and have been around for over 30 years,” he said. “I’ve been all over the country, from state to state and have competed around the world.”

Klait became interested in bodybuilding as a young man in Berlin, Germany, where his family had moved from Lebanon when he was 1-year-old. He has been in Dearborn since 1988.

He finished high school in Berlin and began competing professionally in America in 1994. His first show was Mr. Michigan, where he placed third.

Klait went to compete in shows in different states, including several world championships. Klait (right) at the Mr. Universe competition in New Jersey

“I want to make history,” Klait said. “I am very happy with what I’ve achieved so far, but I want to reach that next level.”

He has also won several competitions, including Central State in 2017.

“It takes a lot of dedication and heart to stay fit at my age,” Klait said. “Its all about the food and hard work.

“I have the support of my wife and kids, which helps a lot. Keeping up with the diet and routine can become very hard. You have to eat the same meal every two and a half hours, month after month, to prepare for shows.” The diet consists of foods high in nutrition but otherwise clean and devoid of unnecessary carbs and fats.

In addition to keeping up with his own grueling routine, Klait also trains others to meet their health goals. Klait and his wife, Mageda

His clients range from people interested in getting on the bodybuilding competition stage to those just looking to get healthy and lose weight.

Klait has trained at least 50 men and women to get ready for competitions. He trains people at different gyms around Metro Detroit, from Southgate to Melvindale.

He has no plans to stop in the near future. He will take to the same circuit as this year, competing on the East Coast. He hopes to win and move on to the coveted Mr. Olympia stage.

“I want to make history,” he said. “I am very happy with what I’ve achieved so far, but I want to reach that next level. Its hard to find people who do what I do at my age. I am one of the oldest professional bodybuilders in Michigan right now. I want to continue until I become number one in the world in my age group.

“I might retire after that,” Klait added with a chuckle.

Despite the age difference, Klait knows he has an advantage over younger athletes in his sport due to his physical and mental maturity.

“I want to give a big shout out to my wife, Mageda and my children, who have supported me all these years,” he said. “This (sport) is not easy, but when you love something you go for it.”