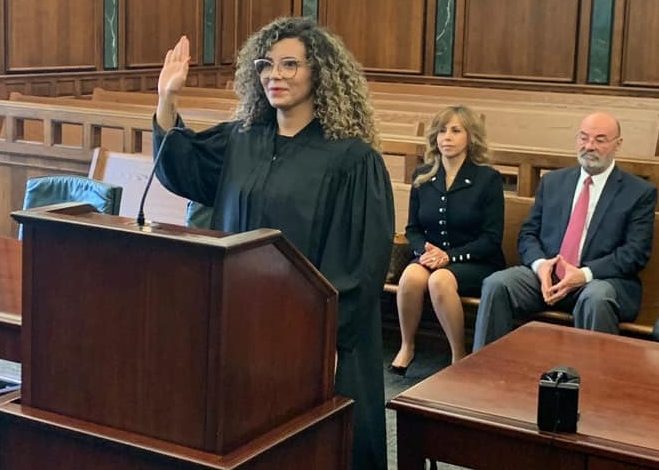 Rula Aoun is sworn in as magistrate in Dearborn's 19th District Court in front of her mother, Mona and father, Chaker.

“I’m very humbled and honored that (Judge Salamey) would appoint me,” she said. “I appreciate his efforts to diversify the bench and to have a woman; that’s obviously very exciting.

“It’s something young women can appreciate and look up to, especially with the amount of female attorneys that are coming about… It’s a great opportunity.”

Aoun was appointed by Salamey to fill the seat vacated by Judge Helal Farhat, who was sworn in to the Wayne County Third Circuit Court bench last week.

A lifelong Dearborn resident, Aoun, 31, currently practices law with Cochran, Kroll & Associates in Livonia, where she has been since late 2017. She also has a private practice and has done work in civil law, family law, personal injury law and immigration law.

She is part of a group of ACRL members who have been active in securing key positions across the Metro Detroit area in recent years. Other success stories include ACRL Secretary Mona Fadlallah, who was appointed as a part-time magistrate on the 20th District Court in Dearborn Heights this June, and Farhat, who also serves on the ACRL’s Board of Directors. Rula Aoun surrounded by her parents, Chaker and Mona Aoun, Judge Sam Salamey and Ghassan Hourani, a family friend, after the swearing in ceremony at the 19th District Court in Dearborn on September 18. “As founder of the Arab American Civil Rights League, Rula being our director, we are astonished she would be taking on this additional job as magistrate in the 19th District Court given her past,” ACRL founder Nabih Ayad told The Arab American News. “And with her knowledge and understanding I think she would make an excellent magistrate and would be an asset to the 19th District Court and the people of the city of Dearborn.

“I am thrilled and feel deserving,” she said. “Hopefully in the future I can excel even further in the judiciary.”

“Rula continues in the line of great talent that is coming from the ACRL family…We are proud and honored of the accomplishments the board has been making.”

Aoun said that becoming a judge was a career aspiration of hers, although she didn’t expect to be named one so soon.

“I am thrilled and feel deserving,” she said. “Hopefully in the future I can excel even further in the judiciary.”

Aoun also said she was also excited to watch the career of her colleague Helal Farhat unfold.

“I consider him to be a personal friend,” she said. “He’s a board member at the ACRL and he’s a very dedicated, very honorable person I believe will be a phenomenal judge.”

A Lebanese American who was born in the United States, Aoun spent her final two years of high school at Star International Academy in Dearborn Heights before securing a degree in international affairs and political science at the University of Michigan-Dearborn, while also majoring in French before graduating from Wayne State University’s Law School.

Aoun has four siblings and is the second oldest. She said she always wanted to be in law and “never had another plan.”

“I think it gives people comfort knowing that they’re coming into court to possibly be in front of someone who was in public service defending people’s civil rights,” she said about her new job and her experience at the ACRL.

Aoun thanked her family for their support and called her father the “driving force behind everything that I did.”

She also thanked the attorneys she’s worked for in the past for their guidance.

“I’m not going to name them,” she said,  “but obviously all the mentors I’ve had in my life and friends who are attorneys, who call and give counseling and support. There have been so many of those people who have helped me along the way and I appreciate them all as well.”