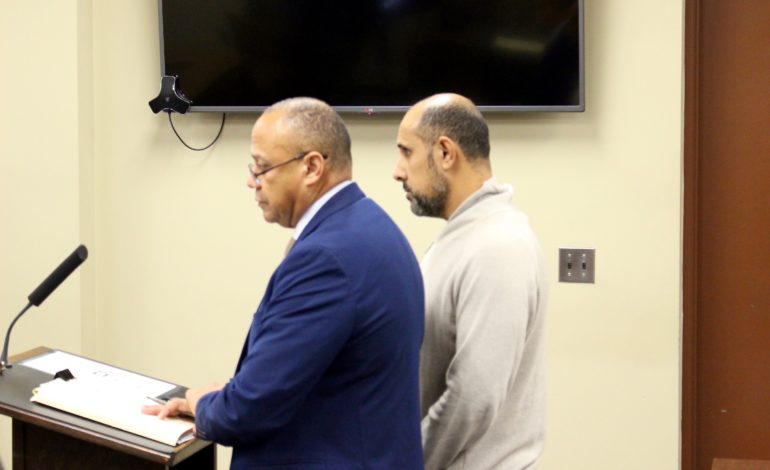 Ibrahim Aljahim stands next to his defense attorney at a probable cause hearing in the 31st District Court in Hamtramck on Thursday, Oct 3. Judge Alexis G. Krot moved the preliminary examination to October 10 at 11 a.m. All photos: Hassan Abbas/The Arab American News

The appearance is Aljahim’s second since being arraigned on two charges of criminal sexual conduct involving a mentally disabled victim. The charges stem from a September 18 incident in which Aljahim is said to have had inappropriate sexual contact with an 18-year-old male student at or near the charter school.

Aljahim was arraigned in 34th District Court in Romulus on Sunday, September 22.

At the probable cause hearing on Thursday, Hamtramck Judge Alexis G. Krot told both parties that she had known Aljahim for some time because of their ties to the same community.

In spite of this fact, she said she was fully capable of remaining impartial in her judicial duties in the case.

Krot proposed that finding the answer to Aljahim’s residency status was as simple as asking him. Aljahim’s defense attorney, Roger Farinha, confirmed that his client’s legal status was in order and that he posed no flight risk and was completely willing to comply with the court’s orders.

Cartwright revealed that there might be as many as three more potential victims or witnesses, two of whom are under 16 years of age.

She pleaded that Krot reevaluate the severity of Aljahim’s alleged crimes and increase his $10,000 at 10 percent bond. She pointed to Aljahim’s previous run-ins with the law, citing numerous misdemeanor charges brought up against him in the same Hamtramck court.

Farinha said all previous charges against his client had been dismissed. Judge Alexis G. Krot issued a tether with no house arrest for Aljahim, but contented that he did not pose a flight risk

Krot saw things differently and refused to increase the bond. She ordered an electronic tracking device for Aljahim without conditions of house arrest or time restriction.

Krot contended that risk of flight was not a real issue in the case and that safety of the community posed a bigger problem. She ordered that Aljahim not have any contact with his alleged victim, whose name is yet to be released.

She moved the preliminary examination to October 10 at 11 a.m.

A source close to Aljahim told The Arab American News she had witnessed his inappropriate sexual behavior when it was directed at her in the past. She also said she was aware Aljahim had planned to leave his job and take up a new one in California at the end of the year.

Aljahim’s arrest brings a wave of unease on the city and its Yemeni community as members of that community prepare to compete at the polls for coveted City Council positions in November.

Aljahim has been a consultant, advisor and contact for many of the city’s political hopefuls. He was also chaplain for Wayne County Sheriff Benny Napoleon. A look at Aljahim’s social media profiles shows his connections with Democratic political elite, including his stint as an important volunteer for Hillary Clinton’s 2016 presidential campaign.